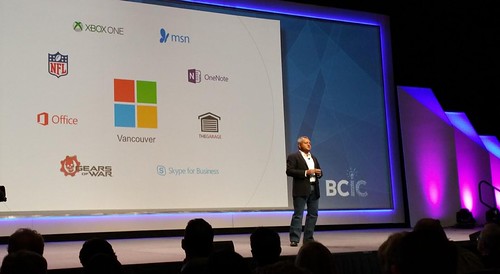 No one in this city should be surprised to know that Microsoft has leased the top three floors of the brand new Nordstrom’s building on Robson and Granville.

According to Microsoft’s CVP, they’ve decided that Vancouver, out of all the major cities in the world is the best place to establish their second home. First being Redmond, Washington of course. The offices aren’t fully operational as of yet. However, the thought put behind placing power-house talent in BC’s Tech world is evident. This is no half-assed expansion into Canada.

I wasn’t aware that Microsoft is planning on bringing up a large slice of their in-house teams. Not in whole. But it’s interesting nonetheless that Vancouver would be home to Skype, Garage, The Coalition (Gears of War), MSN, OneNote, Xbox One, NFL, and Office teams looking for the future of our lives as they are influenced more each day by the tech we have at hand.

“Any sufficiently advanced technology actually disappears. Because it becomes such a useful, human, integral part of our lives. It is no longer tech, it’s life.” – T.K. Rengarajan, Corporate Vice President, Microsoft.

There are three things that Microsoft is pushing for these days, and with their shiny new home in Vancouver, these three innovation pipelines may have a greater effect on life in British Columbia in the future. At the very least, they will forever be attached to our province by location of birth/advancement.

Microsoft prides itself on the innovation of tools as it applies to the tech industry professionals needs, and by way of trickle-down, the consumer as result. Their scalable cloud software is the first pillar in their ability to provide any tool, to anyone in need, throughout their entire company. So while the driving distance between Redmond and Vancouver is negligible by average standards, the need for shared physical tools is nullified by the ability to adapt their systems throughout Microsoft in a fluid way.

The tools, and the adaptive cloud they flow through, are of course key ideas in ways that any company could use in their creative process.

There’s this thing called virtual reality. You may have heard of it. Microsoft is one of the leading tech companies behind dissolving the gap between those who want it in their lives, and those who can afford to have one in their homes. Hololens is an adaptive virtual reality headset that places pieces/blocks of virtual reality into the real world.

Microsoft is going a step above and ensuring that Hololens plays a big part in high-tech development around the world. Putting the apparatus in the hands of tech companies to assist in a way previously not considered. Hololens, as shown by a quick little reel, plays a huge part in the design, statistics, engineering, and planning at Volvo, one of the world’s most innovative car manufacturing companies.

They also have lots of plans for their assistance system Cortana. A digital assistant that finds things for you, helps you plan your day, and eventually will act independently (not skynet-like) to procure interesting things to interject your day with. Hololens, and Cortana, along with the Microsoft Band, and fitbit, are looking to change the way we interact with the world in a more intimate way than most common technologies.

Through innovations in OneNote—Rengarajan speaks of a Hackathon winner who used OneNote to change the way dyslexic people can interact with written materials—and their “Garage” program, productivity is a huge part of the industry. Microsoft looks to revolutionize how we (as people) can be more productive.

The new office in Vancouver will house a Garage. This program, which made Rengarajan’s face light up the moment he spoke of it, plays host to one of the world’s biggest hackathons, where talented people from all over the world attempt to create new tech that “hacks” the way we see/live in the world today. With Vancouver already home to countless large-scale game jams, and young talent in abundance, looking for a reason to flex their muscles, and ideas, a Microsoft funded Hackathon may just be the next big thing this city is in need of.

Rengarajan made a point to boast of his first time travelling to Vancouver, or BC as a more general location, and immediately the sincerity oozed from his words. It goes to show that since the Corporate VP of Microsoft is so adamant regarding the value of tech creation in BC, the weight stacked onto the new Microsoft office here will see a large impact on our industry.