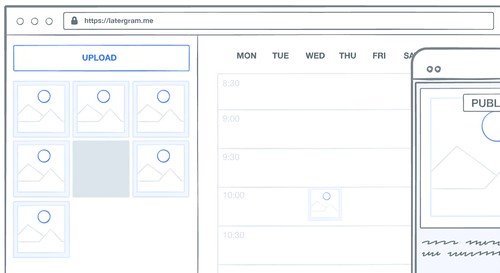 It’s obvious to anyone that a branded photo of Taylor Swift holding a bottle of pop wasn’t shot on a mobile phone and shared on Instagram right away. Indeed, the post may have been queued up a week ago.

These days, many companies are scheduling their Instagram posts—and lots of them are using a made-in-Vancouver app to do so. Incubated at Launch Academy and launched in 2014, Latergramme now boasts more than 400,000 connected Instagram accounts and has been used to create three million posts.

“Quite often, it’s for brands,” Ian MacKinnon, cofounder and technical lead at Latergramme, said by phone on his way to the startup’s office in downtown Vancouver. “Usually, what they want to do is space out all of their images, because it’s kind of lame to post four posts all at once on Instagram. You get better engagement off of spreading them out. And also sometimes you have certain campaigns that you want to have ready to go ahead of time.”

With a staff of seven, Latergramme added support for video in late September. The app is available for web, Android, and iOS. Users get 30 posts per month for free, while paid subscriptions start at $19 per month.

Does your organization schedule its posts on Instagram? Here’s six useful tips from MacKinnon.

“We have a lot of brands that show pictures of clothing at their stores. It’s always so much more compelling if someone is wearing the clothing rather than just having them laid out on a table.

“Your feed has to be visually interesting. There’s no amount of tricks that will get you more ‘likes’ than just having really good, compelling, original content.”

2. Avoid screenshots and images of text.

“We have a suspicion that Instagram actually weights those lower when it’s trying to determine what to show on the popular tab. Because a good way of getting new followers is to have content show up on people’s popular tab. But if you look at your popular tab, you’ll see that there’s a lot more original photos than there are quotes or screenshots from your iPhone.”

“Hashtags are a great way to get more followers, because they allow people to discover you. I think people have this notion they should hashtag the most popular ones—the hashtags that are the most active. But those don’t necessarily give you the most number of followers.

“If you hashtag #instagramdogs, you’ll get a bunch of people looking at it very briefly, but you’re going to get buried by other content very quickly. If you go to a hashtag for something that’s a little more localized—a smaller group—you’ll actually find you get better engagement and ‘likes’ and more followers off of things that are more niche and have more community around them.”

“We find that there’s quite a bit of a spike on ‘like’ activity around 5 p.m. Eastern time. For big, massive brands, they tend to get the biggest spike around five o’clock Eastern time, because that’s where most people are living. We suspect that’s a combination of it being at the end of business hours—you get less companies posting—and everyone else getting off work, so they’re checking Instagram.”

“Compared to more legacy social-media platforms like Hootsuite, we’re more visually oriented. Platforms like that are very much based around the text and they’re very beholden to it, whereas we’re going to be very much visually focused.

“The key reason that we made Latergramme was that people wanted to get a lot of content from the desktop to their phone. We’re the most efficient way of doing that.