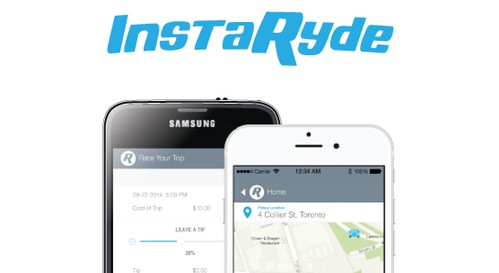 Amidst the chaos of taxi protests and the creation of new Toronto bylaws governing mobile transportation networks, InstaRyde has launched in the GTA as a homegrown alternative to American ridesharing giants Uber and Lyft. Unlike its competitors the startup does not inflate rates during high-demand usage periods, known as surge or prime time pricing.

Says co-founder and CEO Karim Sumar, “We believe in the experience. All the drivers should be giving you a five-star ride every time, and more importantly it should be the same experience for them.”

Sumar, a self-proclaimed “serial entrepreneur” with a varied background in e-commerce, culinary arts and professional online poker, founded the company in February 2014 along with co-founder Zeeshan Syed, founder of app development business Hak Studio. The app was soft-launched this September with the intention of working out the bugs before ramping up marketing and publicity over the holiday season.

Aside from not charging customers surge pricing, InstaRyde has a similar pricing model to Uber. The only differences are lower minimum fares for all vehicle types, meaning the company will allow users to take slightly shorter trips, as well as lower safety fees.

Drivers for InstaRyde will likely appreciate the fact that the company is only planning to take a 17.5% commission from their ride payments, as opposed to Uber’s 25% and Lyft’s 20%, and that the app offers a customizable tip option, which Sumar says about 70% of their customers have used so far.

On driver insurance, a thorny issue for the ridesharing industry, Sumar says that the company’s premium black cars have commercial auto insurance, just as taxis do, and that the company has extended coverage for all drivers. When it comes to the standard InstaRyde vehicles, however, “drivers are on a mix of the policies. They cannot be covered under commercial insurance until the industry gets full regulation.”

The startup has already completed a round of seed funding and plans to complete their Series A in the first quarter of 2016.

As for the future of the app, Sumar says the company is preparing new features, some of which will be rolled out in the next few months, and planning to expand throughout Ontario. He also notes that the company is interested in exploring all aspects of transportation.

“Consumer transportation is just the tip of the iceberg,” says Sumar, “Our goal is to help humanity move around in a more efficient way while minimizing the carbon footprint.”