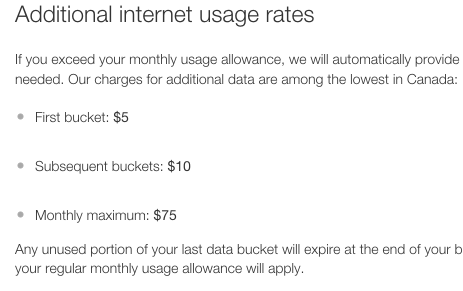 We’ve written stories on how Netflix is disrupting Hollywood, but now it seems the ubiquitous streaming service is causing headaches for Internet providers.

Telecommunications giant Telus, who reportedly has 1.5 million Internet customers in BC, Alberta and Quebec, is now taking measures to deal with the massive increase in Netflix traffic using up a good portion of its bandwidth. Unfortunately for their customers, Telus’s new policy could mean an increase in your cable bill.

Before you freak out, Telus customers, here are the details on the new policy that goes into effect March 30. If you’re not a heavy Internet downloader or streamer, your bill will likely be unaffected. However, anyone exceeding their monthly limit (a limit which had previously been more theoretical than seriously regulated) will be automatically provided with extra “buckets” containing 50 GB of data.

That first bucket will add $5 to your bill, and anything over that 50 GB surplus will be bucketed out at an additional $10 per 50 GB, up to a maximum of $75. At the end of your billing cycle, the data counter will be reset to zero and you will restart with your normal data allotment. If you’re worried about going over, Telus has a warning system in place to inform users by email when they’ve hit the 75% and 95% point in their data usage, as well as when they’ve gone over.

Techvibes spoke with Telus spokesman Shawn Hall, who told us that the company is “re-examining” its policy as consumer demand for Internet data has doubled in the last 16 months.

“Internet usage charges are the norm in Canada, and in Central Canada they’ve been occurring for several years,” Hall said. “Our residential internet usage doubled from 51,000 Terabytes per month to 104,000 Terabytes per month in 16 months and continuing to increase rapidly. We’ve had to look at our practices, and create a system that’s clear, simple and fair so that we can continue supporting the enormous investment required to stay ahead of the demand for internet capacity.”

He explains that the increase of usage is driven by a small percentage of their customers, with more than four out of five users staying within their data allowances in a given month. According to Hall, Telus invests more than $2 billion per year on their infrastructure.

So if Netflix is the presumptive catalyst for this policy change, how much data does it use anyway? If you’re streaming a Netflix movie or your fave binge-worthy TV show in standard definition (really, who streams in SD nowadays?) your digital reservoir would fill at a rate of about 1 GB of data per hour. HD streams use up three times that, at 3 GB per hour. Given these numbers, even moderate Netflix users may be flirting with going over their monthly data cap – and that’s not taking any other Internet use into account.

Strangely, Telus has also just recently made the Netflix service available for their Optik TV customers through the Optik set top box. While Optik TV channels do not count towards one’s Internet data usage, any Netflix use via the new Netflix-via-Optik method will count towards your data bucket.

Sidebar: It’s interesting to note that consumers south of the border are also subject to similar overage fees. AT&T also charges its customers $10 for each additional 50 GB of data, although only when their monthly buckets overfloweth a third time.

Could this be a sign of things to come for Telus rivals? Experts tend to think so. Or perhaps their competitors will use this as a product differentiator for the time being. At least here in the province of BC, Telus has done a good job of converting many of Shaw’s customers into using their cable and Internet services. If Shaw so wishes, they could simply delay the potential data cap revenue by luring customers wanting to go bucketless back under the Shaw umbrella. Would make sense.

Telus, meanwhile, will have to watch closely to see how well this roll of the dice turns out. If the public outcry on the Internet regarding this recent news is any indication, it wouldn’t surprise me if heavy internet customers rip their Team Telus shirts off their backs and change into Team Shaw apparel.

As we’re consuming more data with each passing year (or even month), it’s no surprise that we’ve got to this point. Telecom and cable companies see the huge increase in our bandwidth usage and they’re having to make adjustments in the way they do business to meet the demand.

Does this suck for heavy internet users? Of course it does.

Is it fair to consumers when we’re already paying more for Internet today than ever before? Probably not.

But, as much as I hate the saying, it is what it is. We must remember that the Internet today is in a much different place than it was two years ago from a bandwidth and infrastructure perspective.

We’ve gotta suck it up; and for some, bucket up.