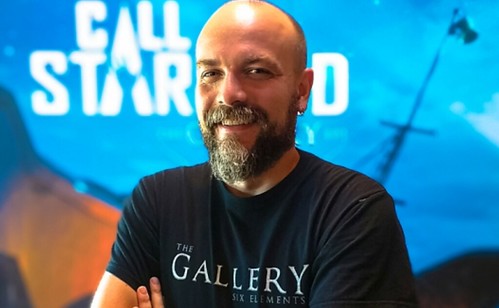 In the run up to the #BCTECH Summit, I had the chance to chat with virtual reality gaming pioneer Denny Unger, CEO of Cloudhead Games, based in Coombs, just a few kilometres from Qualicum Beach, on Vancouver Island. Unger talks about tackling weird problems and makes innovation hard—and incredibly rewarding—for them.

Cloudhead are pioneers in the world of VR and have been developing games on various platforms since late 2012. A successful Kickstarter campaign in the spring of 2013 allowed them to create the first-ever built-for-VR game, The Gallery: Six Elements. Today, Cloudhead have become one of the best interactive VR studios in the world.

Unger takes us through the past year and some of the challenges:

“The last 12 months have been busy. We’ve been going through various hardware iterations [they’ve been developing the HTC Vive platform with VALVe], and we are now on their latest dev kit.”

“The hardware has been coming in so hot that there are fundamental changes happening in both hardware and software. That means you are continuously reinventing what you’ve done previously. This won’t be an issue for developers that start next year, but for us it was a really big challenge.”

Unger talks about how they started:

“Early on in the company’s history, we were pretty naive with planning budgets in relation to developing on hardware and software platforms that were also in the R&D cycle. We just put blinders on and did the work. But as the team grew from three to fifteen people, we’ve had to be more future-facing when planning for funding.”

Their approach had to change so they could develop the company further, he explains.
“About one year after we started the business we became more serious about a continual fundraising path and just seeing how the VR market is panning out for 2016. It’s very important to take into consideration that there is no established market. No one knows where things are going to go, what things are going to be popular, or where the money is really going to be made, so anyone starting a VR company in 2016 has to be aware of that. You have to do fundraising in a more traditional way because you are not going to float on revenue – at least not in the first year, or even in the second year. We know that eventually we will. So, if you can survive, then you will be in a good position.”

What does 2016 look like for Cloudhead and the team?

“Things are going to get crazier for us,” Unger exclaims, “There are certain technologies that are evolving that will further enhance immersion in VR for the user. We are still on the firing line on tackling weird problems that have no Google Search related to them. We have to create everything. I deeply envy any developer jumping into VR gaming in 2016.”

“Very soon we will know what the established market will be, so we are continuing with the dev of four episodes of The Gallery. We are finishing the first episode right now. We will be porting and understanding where the market tiers are. We then start generating revenue and funding more development of IP. We also now have CG Labs that is a skunkworks kind of development team, and we are planning on extending the studio further to double in size (from 15 to 30 staff) over the next six months. Things are just snowballing in a great way.”

So why is Cloudhead based out of the small town of Coombs, British Columbia?

“I believe that being here helps us to stay grounded. We deal in high tech but everyone that comes to work at the studio here has a deep appreciation for what the island represents. It’s protected, vastly beautiful, and ten minutes outside of your door you can be somewhere magical. When you are doing 13 or 14 hours a days in a very stressful industry then to be able to step outside your door and experience that means everything. The focus you get here is intense because you don’t have to go to parties and be in the ‘scene.’”

Unger says that Cloudhead has also seen a huge amount of support from the local community, tech scene, and beyond.

“The support on the island has been great. The government, local municipalities, Innovation Island, and the town of Qualicum have all been incredibly supportive. In fact, they are now letting us take over the 8,000 square-foot disused fire hall where we can create all kinds of crazy VR experiences. The town has this impulse to support a tech industry because they see high tech as the future of the local economy.”

Unger explains that they have had great support from government as well. “At this point we are getting extra support from IRAP, SR&ED, partners, and the usual candidates for this kind of material as it’s research-based.”

But what keeps Unger and his team driving to innovate?

“It’s the novelty and challenge of solving something that has no easy answer. Discovery is intoxicating, and not being limited with what this can be. Both VALVe and Oculus don’t tell you how to do things, they want experimentation. It’s a constant iteration.”

Unger and his team will be releasing the first chapter of The Gallery in early 2016. So stay tuned and keep watching this great BC company that is going from strength to strength.

Cloudhead Games is among dozens of BC companies that will showcase their innovations at the #BCTECH Summit on January 18-19, 2016.

About Nikolas Badminton
Nikolas Badminton is a world-respected futurist and consultant who provides perspective on innovation, the future of work, the sharing economy, and how the world is evolving. Nikolas is based in Vancouver, BC, and works in Canada, UK, Asia, and Europe.