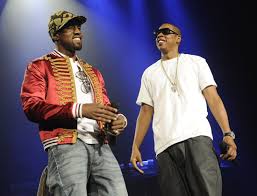 With Jay-Z’s and Kanye West’s highly anticipated album, Watch the Throne, released last week, the two artists have made headlines for something that is rarely accomplished these days: they prevented the album from being leaked before its release.

While nearly every newly recorded project sees its work leaked to the public, the recording artists did everything they could to learn from past experience and took every precaution.

Email is always a huge risk to projects. “During Dark Twisted, we realized that no one’s email was secure, whether it was Gmail or .mac or iDisk,” says project engineer, Anthony Kilhoffer, who worked with Kanye West on his last album.

No part of the project could be stored online — or even on a laptop hardrive. Anytime they were recording, laptops had their wi-fi turned off and the tracks were saved directly to password-protected external hard drives that were stored in locked briefcases.

The two artists didn’t even use proper studios to record the album. Because draft versions couldn’t be sent by email, collaborators had to visit the temporary makeshift setups that the duo set up in hotel rooms in Sydney, Paris, and New York.

Leading up to the release, members of the production team were confident in their messages shared on Twitter. “It is not going to leak,” boasted Jay-Z’s manager and business partner, John Meneilly (who has only ever tweeted three times as @JMeneilly). “Shouts out to Noah for sleeping with the hard drives for like 10 months straight,” taunted Virgil Abloh (@virgilabloh), the album’s art director. “#WTT-still-aint-leaked-yet.”

According to John Giacobbi, founder of internet security company Web Sheriff, most leaks come from journalists who need to listen to albums before hand in order to review it. Other leaks occur in the CD manufacturing and distribution process. Leaks from people working in studios are less common.

“These days 99% of albums will leak early, it’s just a fact of life,” he says. “The bigger battle really is containing the leak once they have leaked.”

The team’s success in preventing any leaks for the album seem to have paid off. The album has now broken the iTunes one-week sales record, selling almost 290,000 copies in its first seven days.