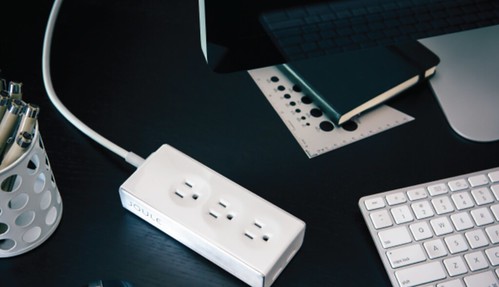 Most people don’t think much about power bars and extension cords, except when they need to plug something in.

Harp Ghoman is trying to change that. He’s the designer of a new style of power strip and extension chord that he says offers sleek design as well as connivence.

“We wanted to make something that elevates this thing that everybody takes for granted,” he says.

The device has three electrical outlets and two usb ports that all glow in the dark. Aesthetically, the bar wouldn’t look out of place next to an Apple product.

Ghoman says he was inspired by companies like Tesla, Dyson and Nest who took unexciting products like electric cars, vacuum cleaners and thermostats and made them exciting.

“They started from a position of designing something that is desirable and adding to that design a feature set that is innovative as well,” he says. “They’ve created an entire audience for something that wasn’t there before.”

That’s what Ghoman says he’s trying to do with power bars.

It’s not easy, he says that getting people about excited about a product they’ve never been excited about before has been a challenge but that he’s received a lot of positive feedback and suggestions through his crowdfunding campaign.

He says the Joule will be just the first product in a line of similar devices. He’s also working on one that will also include battery power.

“If design appeals to you, or innovation appeals to you, if you’re tired of putting up with these sorts of situations where you’re fumbling around in the dark or you’re digging behind your mattress every time you want to plug something in, you don’t have to settle for what’s out there,” he says.