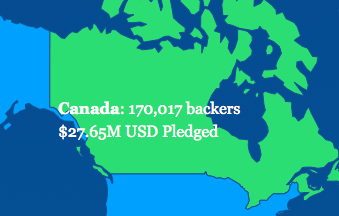 In Canada, 170,000 Canadians pledged a total of $28 million last year, according to the crowdfunding platform. It was a small role our nation played in the grand scheme of things, but we expect the participation of Canadians in crowdfunding to grow as more platforms—Kickstarter included—welcome Canadian projects.