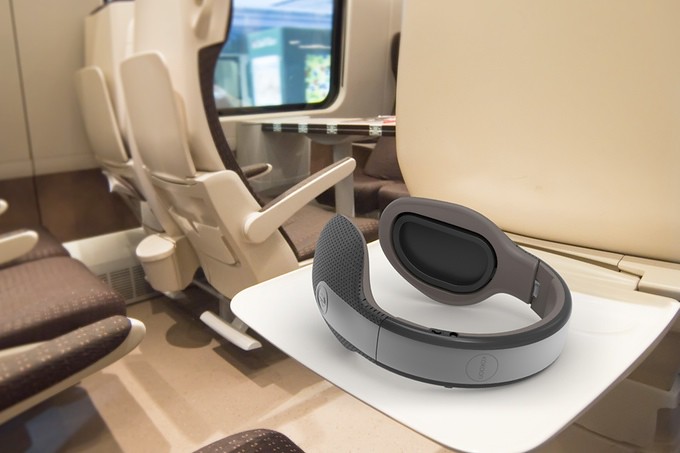 While working at a bank a few years ago, Tim Antos had an important presentation on digital innovations strategy that he was supposed to prepare for a senior member of his bank. He was so nervous that he barely slept for five days.

“I don’t really believe in using medication unless I’m desperate, so I wanted a natural way to sleep,” he says. “Audio-based techniques ended up being the best thing for me, but it was so uncomfortable trying to wear headphones because they’re not designed for wearing to bed.”

This inspired him to play with a 3D printer to figure out if he could make a more flexible and comfortable pair of headphones, and as he became more passionate about the idea, he brought on more people onto his team. Him and his co-founder, who came on six months after Antos starting working on the idea and has experience in making medical products, would spend the next two and half years perfecting their product.

Antos’ product, the Kokoon, is a pair of headphones that are comfortable enough to sleep with and come equipped with EEG sensors to help you track your sleep, and give you insight into your sleeping habits using an app. They teamed up with Onkyo, the owners of Pioneer headphones, to create the headphones, and they adjust volume and equalization as you sleep so that you aren’t disturbed.

“We made them as low profile as possible, and we made them soft so that it would mold to the shape of your head and spread the pressure,” Antos says. “We found that headphones were prone to waking you back up because you would be reawakened to the sound of an audiobook or whatever you were listening to.”

But the road to creating Kokoon wasn’t easy. Their defining feature, the EEG sensors was difficult to implement.

“The key thing for us is to track EEG signals through the hair, which led us to developing our own EEG platform,” Antos says. “My co-founder has made medical products before, but for this we really had to get down to the physics level. The problem we had with off-the-shelf EEG units was the amount of noise you got when trying to go through the hair made the signal unusable. We talked to a lot of experts around the world to figure just to work out how to minimize that noise through the hair.”

Antos would like to use the Kickstarter money to grow the team and help the product get to market faster. He plans to ship to Kickstarter backers in February next year, and shipping to distributors starting in April or May.

“We’ve committed to 10,000 hours of user testing, and we imagine from that that there’s going to be a few tweaks and tunes,” he says. “We just want to blow everyone away when we get to market.”