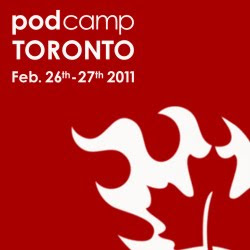 PodCamp Toronto 2011 is Canada’s largest gathering of members of the new media community. From marketers and writers to developers and designers, Podcamp Toronto brings together a wide array of professionals to discuss their expertise on new media topics.

The first Podcamp Toronto was held in 2007. Last year, more than 900 people filled up the halls of Ryerson University’s Rogers Communications Centre (RCC). Podcamp Toronto is an unconference, which means that it’s a participant driven event.

The presentations at Podcamp Toronto are delivered by new media professionals. These are individuals who are currently working in the field or would like to share their specialized knowledge on a topic they’re personally interested in.

My Experience at Podcamp Toronto 2010

As a presenter and an attendee last year, attending Podcamp Toronto 2010 was an eye opening experience. I didn’t completely grasp how many individuals and businesses are curious about new media. Left and right, we heard about businesses cashing on social media; that intrigued people.

How to Get the Most Out of Podcamp

There are at least nine different presentations going on at once; it’s impossible to see them all. Here are my tips to have an awesome time Podcamp Toronto 2011:

1) Know why you want to go and what you want to learn. If you’re looking for a job, sourcing prospects or just curious about what people have to say, make sure you have an idea of the type of individuals you would like to talk to. For me, this helped to have meaningful conversations and meet individuals who aligned to my goals.

2) Don’t worry if you miss a session.  The best part of Podcamp is that there’s always almost a live presentation. Take the time to talk with people around you and say hi.

It can go from halls of quiet and tranquility to complete craziness within minutes. You need to be comfortable with a loud environment and be able to keep a conversation with many people around you. Within a 5-minute conversation during the transition period to the next set of presentations, there may be as many as a 100 people who have just walked past you. If you’ve been to a Sprouter recently, you’re in good shape!

3) Don’t have business card? You have Twitter! On each nametag, everyone wrote their Twitter handle. This is a great way of learning a lot about the person you just finished the conversation with and meet up back with them if the conversation flowed between you. Make sure you follow the hashtag to keep in the loop about what other attendees are talking about, how the presentations around Podcamp are going, as well as what’s going on around the building.

PodCamp Toronto 2011 is held this weekend on February 26 and 27, 2010, at Ryerson’s Rogers Communication Centre. For more information, visit http://2011.podcamptoronto.com.

Your turn: have you been to Podcamp before? What was your experience?