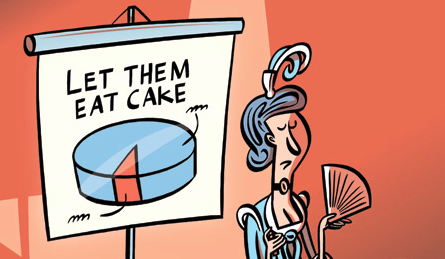 “Let them eat cake,” or the French translation “Qu’ils mangent de la brioche,” are famous symbols of oppression that have largely been forgotten in our on-demand world.

The words, famously in response to the news that the peasants—who spend 50% of their income on bread—were starving, is such a strong symbol because the making of brioche, or cake, requires not only the flour needed for bread, but unheard of luxury items like butter and eggs. It was a perfect reflection of the elites patent disregard for the condition of the people.

This attitude didn’t work out very well for the “heads” of the elite as they were paraded to the guillotine. It was a symbol of oppression but, probably more important, it was a symbol of of a moral authority that had been built up for many generations and had been slowly and irreversibly lost over time.

I think that this loss of moral authority explains a lot about our general discontent with government, banks, cell phone providers, airlines and now most relevantly the taxi business. The government should think long and hard before going against the wishes of the majority of people who want a 21st-century experience in any of these industries. The calculated and political answer that these organizations are going to “reform themselves” simply isn’t believable. In the taxi business specifically, what is relevant is the fact that these organizations provide an expensive mediocre service at best that hasn’t changed (crappy app that doesn’t really work aside) since I flagged my first taxi 20 years ago.

“Let them eat cake” is simply not going to work here. We travel too much. We see how amazing a truly “on-demand” private transportation system can be. My strongest advice to any protectionist politicians fighting this because they either received campaign funds or are somehow swayed that it helps the general public when a taxi medallion can be re-sold for one million dollars is this: it will happen, it makes too much sense, and it will provide lower prices and provide better service. You can’t fight that.

The same goes for the big banks, cell companies, cable companies, airlines, and insurance companies. Moral authority has simply been lost. A truly non protectionist and customer-driven revolution is coming in these industries.

Software and customer first attitudes will indeed eat these worlds. And when they do people will actually be able to not only make cake but eat it too.