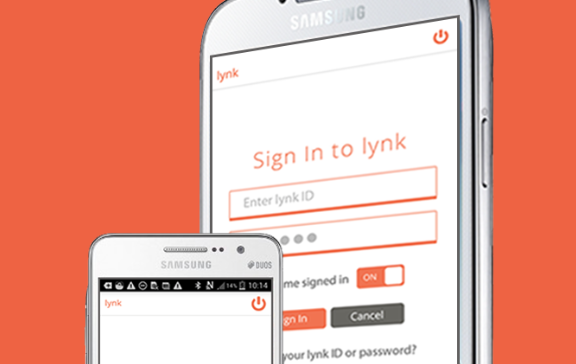 When Vincent Ramoutar’s daughter was going to medical school two and a half years ago, he wired her some cash, as many parents do, which she accessed using her TD Bank mobile app.

An hour later, she got an email from TD saying that she needed to verify her account details. Little did she know that this was actual a phishing scam, and the $200 she received from her parents was taken out of her account.

“I thought about carrying a device that you could carry with you to protect what’s on your phone, but to also be an alarm to help you find your phone should you lose it,” says Ramoutar. “That was the birth of an idea.”

People carry a lot of sensitive data including passwords, credit cards and PIN numbers on their phone, and that’s what drove Ramoutar to found Toronto-based uConekt Inc., the startup behind lynk, which he calls a “first line of defense” against identity theft. Users download the lynk app onto their phone and, using the lynk smart device itself, touch the two together to pair it onto their smartphone or tablet. Working within a range of 30 metres and with a battery of three to four months because of its low-power Bluetooth connection, the smart device encrypts your data so even if someone tried to take phone or your information, they wouldn’t be able to access it.

“You transfer your passwords, files and all of your information here so it becomes encrypted,” Ramoutar says. “Even if they have the smartphone, all the information will be in the lynk so they won’t have access to passwords or login info.”

If someone stole the lynk device itself, it would be useless without the smartphone, and users who are unlucky enough to have both devices stolen can use the uConekt site to notify Ramoutar’s team and have them disable the lynk device that contains their sensitive information.

Other fun features include the ability to have your phone ring if you’ve misplaced it by tapping on your lynk three times, even if it’s on silent, and the ability to receive the last known GPS location of their phone if they’ve lost it. Ramoutar differentiates the latter from services like Find My iPhone because these services just provide a general GPS location, whereas if someone wanted to find their phone using lynk, it would start beeping and vibrating as they got closer to their device, giving them a better sense of where to look.

“When you have your information on lynk, it’s in your control,” Ramoutar says. “Yes, it’s in the cloud, but you have the key to unlock it.”

Eventually, Ramoutar wants to use NFC in the device to allow users to make tap payments using lynk – which they are currently in talks with major banks about to get their permission.

Ramoutar is currently hosting an IndieGoGo campaign to raise $20,000 for a few reasons – to get an understanding of their demographics and get some validation for the market, and also get the funds to complete their apps. They are still in beta testing for Android, but are currently working on iPhone and Blackberry versions.

Regardless of whether they meet their outcome, though, Ramoutar is aiming to launch for August of this year.

“Yes, we’re learning the user community and the demographics, but in talking to real technologists and investors and financial community, I believe we now have a lot of validation,” Ramoutar says.