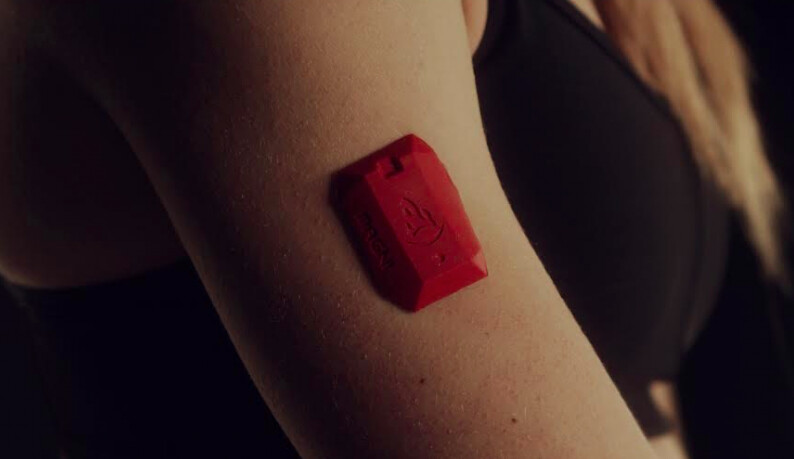 Wearable wristbands like the FitBit have been touted in the past as the future of the way we track our body metrics. But for some, a wristband doesn’t go far enough.

MagniWare, a Toronto-based startup, aims to change the way we think about accurately tracking wearables. They’ve developed an adhesive technology and implemented it into a patch, thinner than an iPhone 6 that can be easily stuck onto the skin, anywhere on the body, and reused. To maintain the adhesive property, users can just wash the patch with soap and water.

Describing it as a “second skin,” They plan to launch their product this fall.

“As a consumer, it’s not useful if I’m a young man or woman to know heart rate,” Alex Mosa, CEO of Magniware, says about traditional methods of tracking heart rates and steps that don’t paint a more detailed picture of overall health.

If a user wanted to monitor their ECG, the patch could be placed directly on the ribcage and could monitor ECG signals using electrodes that are embedded inside the patch, with higher accuracy than sensors on the wrist. It then transmits that data to an iPhone, Android or iPad, and the signals could be processed.

He says that tracking the latter can only really be done through monitoring heart rate variability, and looking at the discrete changes in the interval between heartbeats. From that data, things like stress level and anxiety levels could be more accurately tracked.

Users can also track things like REM sleep, stress, cognitive functioning and fatigue levels, and can go so far as to track certain muscles by categorizing, based on the EMGs of actual muscle signatures, factors like exertion, category of exertion and fatigue associated with it.

Founded by a team of eight friends that vary across academia – Mosa himself did a phD in virology in immunology, and the team has a chemical and tissue engineer, an expert in robotics and a friend with an MBA, to name a few of many specialities on their team – Mosa believes diversity in skill sets contributed to the unique wearable they first started the project.

“We came from all parts of the world and different disciplines,” Mosa says. “It was like a rogue lab and I had this feeling when I started where we didn’t feel bounded. We just kept the imagination going.”

Their academic backgrounds also prepared something that could pass the sort of scientific rigor that they would face from colleagues and scientists in their respective fields.

“We weren’t really interested in making a wearable activity tracker. We wanted to design a device that would be able to grow into any level of accuracy required, whether clinical or consumer,” Mosa says. In order to do that, they extensively looked through scientific literature as possible and tried to find the most reliable results and indicators were before converting it into their software code.

“The platform then works by taking this data that’s very accurate and making use of it by processing it and showing the user a downstream indicator that is more relevant to their life,” Mosa says.