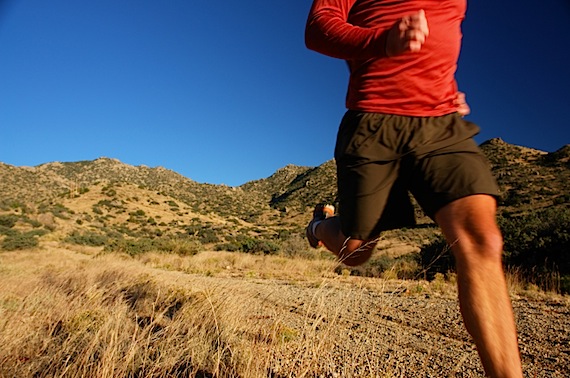 There is a difference between the entrepreneur that becomes successful and the one who does not. But it’s not as big of a difference as you may think.

Of course entrepreneurs often have to make several startup attempts before finding success, but as they improve and become better entrepreneurs, they develop a performance and attitude change that often alters the outcome.

In 2012, my son asked me to join him and go for a run. Excited by the prospect of doing something together, I readily agreed and laced up my sneakers. I ran four blocks before my legs decided that this was quite enough.

I was shocked. I was shocked because I was regularly running on a treadmill and I found out that it is not at all the same as running outside. My son was too. He looked at me with that look that must have been disappointment. I’m not sure what it looked like, because I couldn’t look at him.

I was so disgusted with my physical conditioning and the performance that I had just demonstrated, that I decided at that moment that I would change. And I did. My first goal was that I would run 5km. That seemed huge. A friend who runs told me that I should think about doing a half-marathon. Well that seemed so bizarre, I wouldn’t even entertain that thought.

A half marathon is 21,097 meters. With an average block length of 200 metres, four blocks is 800 metres. One year after getting off the sofa to run 800 metres, I ran a half-marathon without stopping. In one year, I had made a 2,500% improvement.

I did it by making small constant improvements. Nothing dramatic. I didn’t run a half marathon the day after I decided that I would. I made small distance gains every time I ran a long run on Sunday and small speed gains on 5km runs during the week.

The funny thing is that it wasn’t hard. I’ve told my story to a few people and quite a number of them say, “Oh, I could never do that.” Maybe you think that you can’t. Yes, you need good knees, but knees aren’t usually the issue. The issue is usually the same issue that blocks us from accomplishing so many things.

And that’s the crap that’s going on in our heads. Of course you can run. Yes, you can if you decide that’s what you’re going to do. Outside of physical limitations, the decision is the only difference between those who do and those who don’t.

I thought this was important. Running is great. I love it and when I run now I often think about how four blocks was once hard for me. I sometimes accelerate to a full sprint when I get to the spot where I first failed because it makes me laugh.

I had previously thought that my fitness level was good enough. Now I no longer accept that. But then I started to think about applying this same principle to other things. The more I thought about it, the more I realized that there is no area in our lives where this does not apply.

What if we applied this discipline to everything else in our lives? Maybe you don’t need a 2,500% improvement. Think for a second about something that you wish you could improve in your life. Maybe 100% change would be all you need. Maybe 1,000% improvement in anything you can imagine would change your life in a manner that you currently can’t even imagine.

The reality is that 1,000% change is not only possible but simple and predictable. Improve 3% a day for a year in anything and you’ll improve by 1,000% in one year. In one year, you’ll be a master of the thing that once scared you to even consider. Want to be a better person all around? A better husband, friend, employee, employer, uncle, athlete or musician? Small, constant improvements over time in this manner can only lead to massive, currently unconceivable change.

Plan it out. Monday – Sunday. What will you do every day to be 3% better than you were before in every area? What will I read, watch or listen to today and then immediately apply to my life that will work toward change. People are always looking for a single big solution. A silver bullet. There is no silver bullet. There is no magical revelation. The answer is so much more simple than that. What does it take for you to be 3% better today than you were yesterday? Almost no effort at all.

In football, the game is often referred to as a game of inches. All NFL teams are staffed with professional coaches. All NFL teams have world-class athletes. The difference in results however are vast. Throw six inches behind the receiver, the play is lost. Be half a step too slow, the play is lost. Jump one inch too low to block the pass, the play is lost. Can’t muscle your way that last inch to make a first down? The game is done. Dynasties are created by those teams that don’t accept that their current state of ability is acceptable. Those who see that small constant improvements will give them the edge that will always keep them competitive, if not dominant.

Let’s take it back to running for a moment. Imagine now that you are a runner and that you are running a half-marathon with your best friend. You’ve both decided to run this race and you’ve decided to run it together. You’re practice times were pretty much the same so running the race together seems like a good idea.

At 10km, there are many people between you. You know he’s up there, but you can’t always even keep him in sight. But what about the finish line? Your friend is 21 seconds ahead. By the time you can see the finish line, you’ve completely lost sight of your friend. Find a clock with a second hand and watch it for 20 seconds. It’s a very long time.

Now go in a room with no noise or distractions. Close your eyes. Don’t count. Just imagine you are standing still and someone is running away from you for twenty seconds. Have someone else tell you when twenty seconds is up. Two things should be clear: first, the runner ahead of you is far out front and in the distance; second, twenty seconds is longer than we think.

Nothing is “good enough” any longer unless I did everything I could to be my best. At my second half-marathon, I beat my previous time by 13 minutes. Where once the very suggestion of a completing a half-marathon was inconceivable, I was now becoming competitive with my past performance. Throughout the entirety of the run I kept my focus on my pace to ensure that I didn’t miss my time/km by even one second because as we just found out, one second is the difference between success and failure. Maintain your focus, make small, consistent improvements and massive transformation is inevitable.

What is it that you want that is so important to you that you will no longer waste time? Consistent incremental movements toward a goal leads to massive reward no matter what your goals are. This is important. It’s life changing if you make the decision. And if you make the decision, you can create tremendous positive change in your relationships, work, hobbies, fitness and in your business.

It’s all inches of change that makes great results, fractions of a degree that alters your destiny. It all matters, every day.