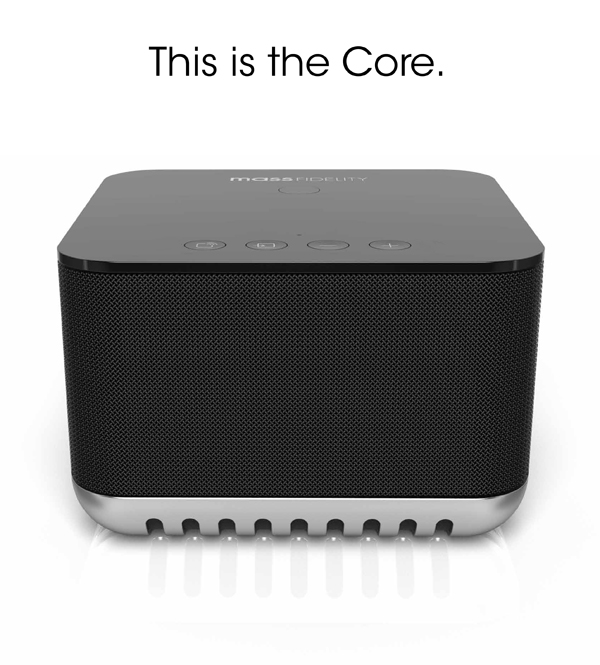 Toronto’s Mass Fidelity recently showcased its Core Wireless Speaker System at the 2015 Consumer Electronics Show (CES) to the widest audience the product has seen to date before it becomes available in retail later this year.

The Core is a compact wireless speaker system that combines “better than stereo” sound using Wave Field Synthesis with a feature set including, portability, multi-room functionality, clear audio and the ability for integration with many of the leading control systems such as Control 4 via a control port on the rear of the unit.

Garnering interest from dealers, distributors and consumers alike, Mass Fidelity made a big splash at CES and was awarded a CES Innovations Honoree Award as well as being presented with the coveted “Top Pick Award” in the Bluetooth Speaker category by Tom’s Guide/Laptop Magazine.

Coming off a Indiegogo’s most successful Canadian campaign to date which generated over US $1.1 million in sales to 100 countries, Mass Fidelity continues to offer the Core Wireless Speaker System for pre-order both via the company website as well as a continued funding effort through Indiegogo.

“We were extremely pleased with the response we received during CES,” said Ben Webster, CEO and cofounder of Mass Fidelity. “During the show, we continually watched people’s reactions as they listened for the first time and expressed an equal amount of amazement and perplexing uncertainty.”

Canadian crowdfunding campaigns were very successful on Indiegogo in 2014 as it seems consumers are taking the concept more seriously.

“An older paradigm about crowdfunding was four guys in their garage who couldn’t find money any other way,” Indiegogo’s Steve Tam recently told Canadian Press’ Michael Oliveira. “Now we’re seeing an increasing number of companies who are either already in market or have a very validated product and are using crowdfunding as a part of their marketing campaign, or their fundraising, or their access to international markets.

Responsible for Tech, Hardware & Design at Indiegogo Canada, Tam will be a keynote speaker at the upcoming Dx3 Conference in Toronto in March 2015. During his keynote Tam will provide the tools to help overcome some of the assumptions marketers and retailers use in identifying their optimal customer when running a crowdfunding campaign. Register now to hear Indiegogo’s Tam at Dx3.