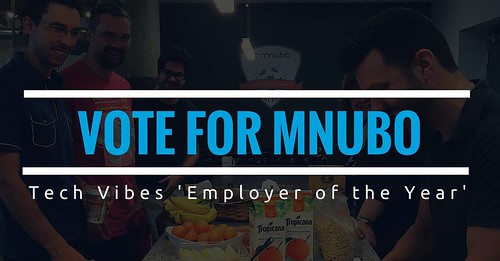 The Internet of Things has changed the way we experience technology and will continue to push the goal of a smart society into fruition.

However, after 18 years working in the telecom and wireless sector, Frederic Bastien realized that the industry wasn’t prepared to handle the growing volume of sensor data generated by IoT.

In 2013 Bastien, along with colleagues JC Cimino, Aditya Pendyala and JC Beaudin went on to launch Mnubo, a company focused on analyzing the world’s IoT data to make it more valuable. This year the company is up for an Employer of the Year award.

Mnubo’s founders were originally part of the management team of Montreal startup Blueslice Networks, up until it was acquired by Tekelec in May, 2010. Though they stuck it out for another few years, “we were missing the startup life,” jokes Bastien.

Furthermore, their roles in the telecom and wireless industry had introduced them to the emergence of Machine to Machine interfacing, the precursor to the IoT. Bastien says that the group was able to observe the industry grow into what the IoT is today.

“The IoT is completely revolutionary technology that will affect all industries,” said Bastien.

He goes on to say that the multiplying amounts of data generated by IoT require us to modernize the systems that are currently designed to read data.

“The more data you have, the more complex the tools and processes you need to manage it in a scalable way,” said Bastien.

He adds that it’s not scalable for every manufacturer to build their own system for managing and storing what will be a amount of data.

“If everyone tried to read their data from scratch, it’s going to slow down the industry.”

Bastien explains that this is where Mnubo becomes an asset to companies looking to collect and learn from their object data.

“Mnubo is somewhere in between. We don’t build custom solutions but we’re also not just a toolbox. We’re one of the few players with a unique approach to IoT,” Bastien says.

He says that their target market is companies that yield between $20 million and $200 million in revenue.

Bastien says that the company entered the marketplace at exactly the right time, positioning themselves at the helm of the IoT revolution.

Techcrunch reported in October of 2015 that vulnerabilities have been discovered in IoT devices such as baby monitors, Internet-connected cars and wearables. The article goes on to say that the issue of IoT security has been pushed into the spotlight as a result of those realizations and is even being focused on by governing bodies.

Bastien acknowledges these concerns and states that maintaining the integrity of their client’s data is one of their priorities alongside delivering data-rooted insights.

Bastien believes that the IoT will be integrated into every area of human life, and hopes that it will eventually become as transparent to the public as the Internet itself has become.

“Eventually, people will stop thinking of the IoT as just hype,” says Bastien.

Internet of Things data analytics company Mnubo announced today that it has raised a $6 million round of financing to accelerate its IoT data science development and expand the commercialization of its SmartObjects analytics service.

The Series A round was led by White Star Capital and included McRock Capital.

Last year mnubo was named one of PwC’s 10 Up-and-Coming Canadian Tech Companies and one of Deloitte’s 15 Companies To Watch in Canada.

Over the past year, Mnubo has seen an increase of over 400% in the number of connected objects on its platform. These manufacturers are using the Mnubo to enrich their sensor data and integrate insights into business processes.

“In 2012, mnubo was a precursor in Analytics built specifically for the IoT. Today, it has become clear to the entire industry that the real business value is about transforming raw sensor data into actionable insights,” mentioned Frederic Bastien, co-founder and CEO at Mnubo.

The Series A funding will be used towards expanding Mnubo’s global commercial team, enhancing the user experience and accelerating its ongoing data science and machine learning initiatives, the Canadian company says. Mnubo plans to hire more talent in Montreal, and abroad, to fuel its product development and commercialization efforts.

“Billions of connected devices are already around us today and tens of billions more will come online soon. While these sensors capture data, a solution like Mnubo’s is critical to turn such data into business value,” said Jean-Francois Marcoux, General Partner at White Star.