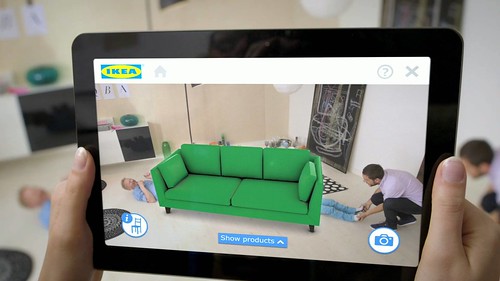 The size, functionality and connectivity of mobile devices have brought computers to the point where they’re now able to reflect our cultural selves and augment our day-to-day existence.

In a recent MIT Sloan Review interview Sara Armbruster of Steelcase noted that “technology is actually a form of culture, a manifestation of our culture and what we value.” Mobile has had such a massive impact on who and how we are because the devices are scaled to fit the human experience.

The first computers, mainframes, couldn’t augment our lives effectively because they were too bulky and expensive for everyday people to access. Desktop computers made computers accessible, but utility was still limited because you couldn’t leave the desk. Laptops were another great leap forward in that we can now bring our computers, and their connectivity, with us wherever we go, but they still require opening, start-up, and siting down to use. Mobile is different because we can take it anywhere, hassle free and can access it in a few seconds.

The progress of mobile can be broken down into a series of phases or waves much like the evolution of computers as a whole. There have been three distinct phases.

The first phase of mobile augmentation was the ability to communicate with each other anywhere, anytime. While discussing this recently with a mentor he lamented about how much fun was sucked out of business trips when the boss could get hold of him anywhere, any time.  For better or for worse, personal and professional relationships went from being rooted in physical places to being carried with us wherever we go.

Next, we included networked computers in mobile. Connectivity and processing power enabled us to access the web’s vast stores of information and organize ourselves in new ways. We began augmenting our knowledge base and augmenting how we organize ourselves socially with the mobile device as the facilitator. Services like Yelp help us find out where to eat by showing us which restaurants are in our area and crowd sourcing reviews. Even revolutions like the Arab Spring were enabled by people’s ability to organize, communicate, and share information through Mobile.

The third wave of augmentation was made possible when the makers of Mobile devices started to add sensors to the platforms.  There are now thousands of apps available that will actively help you monitor and manage your body.  These apps can help you monitor your REM sleep, tell you how many calories you’re burning, and if you’ve been sitting too long.  Mobile is augmenting our relationship with our physical selves.

We’re now entering into the fourth phase, augmenting how we interact with the physical environment around us.

Sensors in Mobile will allow us to do things like monitor air quality, warning us when we’re in unhealthy environments, use minute changes in pressure and humidity to warn us when a rain shower is about to hit, or use electromagnetic changes in the air to warn us when a lightning storm is imminent. For people with nerve damage, Mobile devices will allow them to safely monitor their environment for temperature changes. Eventually, the sensors in mobile will even be able to “smell” things like peanut residue and will warn people with severe allergies.

Currently, in the Internet of Things, mobile is mostly framed as the enabler. Companies can Bluetooth, or otherwise connect, smart products to device using the processing power and networked capabilities of Mobile to leverage the power of networked, smart products. Once we move further down the path of realizing the power of the Internet of Things, as explained in Micheal Porter’s great article on the subject , the role of mobile will come front and centre.

Mobile is not simply an enabler of the Internet of Things.  As the sensors in mobile get better, as the variety of sensors grow, we’re going to leverage collective information in exciting new ways.

We’re still in the early stages of realizing the true power of the smart devices we carry, and in the very near future, they’re going to touch every aspect of our lives, including how we interact with the environment around us.