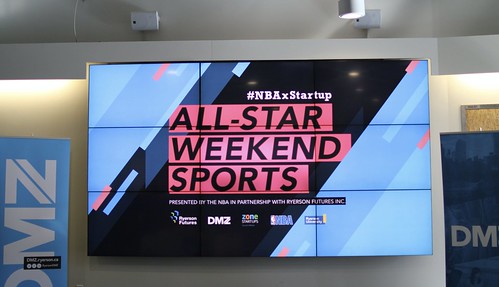 NBA executives in Toronto for the 2016 All-Star Weekend took part in an event held in conjunction with Ryerson Futures and the DMZ to showcase emerging technology in the world of sport.

The event brought these NBA executives together with sports technology startups at the DMZ to talk about how emerging technology will change the world of sport.

After the opening speeches six startups pitched their products to those in attendance. Six other startups also had booths around the DMZ allowing NBA executives to ask questions.

The consensus of the event was clear: technology is changing sports like never before. Companies like PUSH, that uses accelerometers to help trainers and coaches optimize their athletes training by telling them when an athlete is being underworked, and when the wearer needs to take a break. Other companies are aiming to change the experience for people at an event. Brizi, for example allows people at a sporting event to use their smartphones to control cameras that have been installed around the perimeter of the venue, and share those branded images over social media.

Technology has been transforming the world of sports for a long time. The proliferation of social media alone has fundamentally changed the way people follow sports. Mark Cohon was the commissioner of the CFL from 2007 to 2015, and he saw that change in real time. “We were very progressive in using social media. I would engage fans with questions, and It allowed me as commissioner to interact with fans,” said Cohon.

While the changing landscape isn’t new, executives in the NBA believe that advancements in technology and an increasingly tech-savvy fan base will expedite changes in the future.

“All you have to do is use history as a guide. In five years, the way fans interact with their favourite sports has changed dramatically. In the next five years that change will accelerate,” said Dan Mackenzie, the vice president and managing director of NBA Canada.

The event was held as a way for Ryerson Futures and the DMZ to kick off their new sports media accelerator, Zone Startups Sports|Media, the first of its kind in the world. The new accelerator will connect sports technology startups with mentors, and eventually with the leagues and media outlets who will use their products.

“At the early stages we’ll have a lot of mentors on the tech side of things, and with ownership groups and vice presidents in the media space. Then we’ll be looking to leagues. The NBA has been a great early stage partner, and we’ll be looking to the MLB, NHL and NFL as well,” said Mike Cotton, who will start as the director of the Zone Startups Sports|Media on March 1.