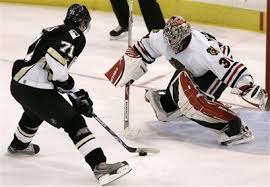 If you’re on Google these days and do a search for “hockey,” you may notice that Google has the scores for today’s NHL matches and links to league resources right there waiting for you.

It’s called the “NHL Live Result” and it’s part of a new partnership between the search giant and the NHL. Just as weather news for your local area through The Weather Network is the top search result when you search for “weather,” Google brings pertinent info about what’s going on in the good ol’ hockey game faster and easier than ever before.

Props to VentureBeat for bringing this to our attention:

Google currently does not offer live scores for any other major sports leagues such as the National Football League or the National Basketball Association. The company did not respond to a request for additional comment on when it may start offering live scores across the board.

But with those sports seasons well upon us, it makes sense Google will soon strike similar deals with those leagues as the rush toward targeted, structured data continues.

“Many of you are sports fans, and we’re always delighted to make improvements that help you find those scores, stats and recaps,” said Google. “We partnered with our friends at NHL.com to provide rich information in the snippets of the NHL.com results…making it super-easy to keep up to date on the latest NHL action.”

In terms of getting on board the whole “Internet” thing, as the kids call it, the NHL seems to be the leaders of the pack when compared to the other three big North American sports leagues. Take Yahoo!’s fantasy sports — while fantasy baseball, football and basketball all feature players and data from MLB, the NFL and NBA respectively, only the NHL has officially partnered with Yahoo! as a sponsor to get their name out there. And just look at the upcoming NHL All-Star Game — the unique format is basically a love letter to fantasy hockey players, and an acknowledgement of how important fantasy sports are to keeping interest in the NHL strong.

The other leagues, however, seem to think that the only thing the Internet is good for is getting their players in trouble.