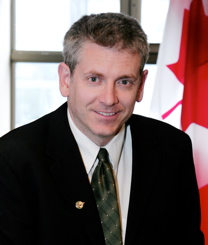 ISPs that plan to charge overage fees on consumers’ monthly Internet plans are going to have a whole lot of fight on their hands in the near future.

A wide variety of individuals and organizations, including the federal NDP, are criticizing both the ISPs’ decision to implement usage-based billing and the CRTC’s ruling to allow them to do it. On Wednesday, Jean-François Mezei, a computer consultant with Vaxination Informatique, filed a motion with the federal government to overturn the CRTC’s ruling.

Mezei’s petition argues that the decision impedes the ability of internet service providers to provide different choices of service for their customers.

“Without choice, there is no competition, and incumbents can then raise prices and lower service limits knowing customer have nowhere to go,” the petition said.

Mezei said Thursday in an interview that the decision will “hurt a lot of people” in the near future by limiting their ability to use the internet without paying large “overage” fees.

In the case of Mezei’s own business, Vaxination Informatique, the decision negatively affects his “ability to choose an ISP that can provide it with the services it requires and which differ from those offered by incumbent carriers,” the petition said.

If Metzei’s petition is accepted, the government will have until October 28th to issue a response.

Metzei isn’t the only Canadian out there opposing the CRTC’s ruling and usage-based billing from ISPs. OpenMedia.ca, an Internet advocacy group that works to “advance and support an open and innovative communications system in Canada,” introduced a 41,000 signature petition on Tuesday, and expressed frustration with the CRTC ruling.

The group said the decision allows the large service providers “to force usage-based billing [overage fees] onto their independent competitors and Canadians writ large.” It warned that broadband usage would cost Canadians much more.

“The CRTC has once again left the wolves in charge of the henhouse. Canadians have come out in unprecedented numbers and demanded an affordable internet, and while there is evidence that this has moved the CRTC, they have not gone nearly far enough,” said Steve Anderson, OpenMedia.ca’s national co-ordinator.

“It is deeply disappointing that the commission has decided to give a few companies a free hand to engage in economic discrimination and crush innovation. Now is the moment for forward-looking, visionary policymaking, not half-measures and convoluted compromises with the companies trying to kill the open internet.”

While the government has been almost silent on this ruling so far, the NDP’s Charlie Angus [pictured] has come out swinging. Angus, who is MP for the riding of Timmins-James Bay and digital affairs critic for the New Democrats, called usage-based billing a “rip-off” in a statement posted to his website.

“We’ve seen this all before with cell phones,” said Angus. “Allowing the Internet Service Providers to ding you every time you download is a rip-off. Canada is already falling behind other countries in terms of choice, accessibility and pricing for the Internet.”

The larger Internet Service Providers (ISPs) are also broadcasters and content providers. According to Angus usage-based billing could be used to limit competition from online viewing sources like Netflix. It could also snuff out competition from smaller third-party ISPs.

“The large ISP-broadcast entities now have a tool for squashing their main competitors – both in internet and video services,” said Angus. “We need clear rules that put consumers first.”

Since it looks like it could take until late 2011 for the government or the CRTC to make a response — let alone changes — to the complaints over usage-based billing, it seems that consumers are going to be stuck with this for a while. If any Members of Parliament happen to be reading this blog post, how about doing Canadians a solid and overturning this thing pronto?