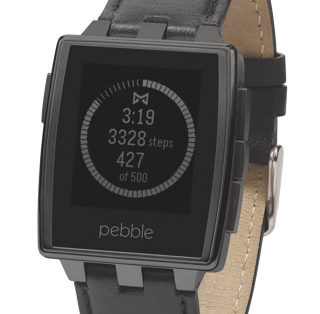 The Pebble, for a fleeting moment, was ahead of its time.

Founded by Canadian entrepreneur Eric Migicovsky, the original Pebble was a smartwatch built for BlackBerrys, developed by a company called Allerta. BlackBerry’s famous collapse brought Allerta to its knees.

From the ashes rose Pebble, reimagined: a company named after its flagship product, which was still a smartwatch, only now compatible with Android and iOS. A record-smashing crowdfunding campaign raising more than $10 million suggested Migicovsky made the right choice.

Briefly, the Pebble was one of very few choices for consumers wanting a smartwatch. Now it is one of many—and most of its competitors boast substantially more “smart” features.

Or are they, in fact, competitors?

Migicovsky claims Pebble has deliberately avoided the elaborate functions of today’s smartwatches, aiming for lower ground, where the timepiece on one’s wrist does just a few simple things—but does them well, and does them for a fair price. It’s a far cry from the likes of Samsung and Apple, which seem insistent on giving these tiny watches as many features as their much larger smartphone counterparts, and charging nearly as much for them, too.

Pebble watches start at just $109, available online or in stores from retailers such as Future Shop, which is significantly less than most smartwatches. And while it doesn’t boast all the bells of whistlers of pricier options, Pebble devices do carry some advantages: battery life up to a week; an e-paper display that is readable in virtually any lighting condition; and a waterproof casing.

There are, of course, drawbacks: while the Pebble will alert you to notifications such as emails and texts, you can’t actually reply to anything from your wrist. You’ll also never be fooled by the Pebble into thinking it’s a premium device—the screen, while readable, is noticeably pixlated, reminiscent of technological efforts that were groundbreaking, perhaps, in a prior decade.

Migicovsky argued in September that he didn’t fear the looming release of the Apple Watch, because, he is quoted as saying, “we’re not trying to make a luxury product like Apple is making.” Despite that, however, he cut the prices of his devices and posted an image online prodding fun at Apple Watch designer Jony Ive.

Whether Migicovsky is scared of Apple, though, and where smartwatches will go in the future, is of little relevance today. If you’re in the market for a smartwatch that’s affordable and handy, the Pebble remains a solid frontrunner.

If you’re seeking cutting-edge, innovative technology, look elsewhere. The Pebble kept the promise it made in 2012. It hasn’t made any new ones since.

A Pebble was supplied for review by our friends at Future Shop.