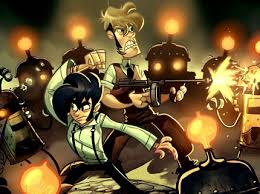 Gabe and Tycho of Penny Arcade, a web comic created by Jerry Holkins and Mike Krahulik — known for their witty and oftentimes crass reviews on games, will be seeing the continuation of their episodic action-adventure game, Penny Arcade Adventures: On the Rain-Slick Precipice of Darkness.

Developer Zeboyd Games — best known for its Xbox Live Indie Games and PC releases, Cthulhu Saves the World and Breath of Death 7 —will be taking control of the project.

RPGamer reports that the newest installment of the series will take on a similar graphical style to Zeboyd’s previous games, which resemble older 16-bit Final Fantasy games. There are no specifics on which systems the game will be released on, but the developer is aiming for “as many systems as we can!” Zeboyd Games will begin a development blog on the game shortly on the company’s website.

The game was originally planned to be distributed episodically with the first installment released in May, 2008 and the second in October of the same year. After an extended hiatus however, Hokins and Krahulik announced the discontinuation of the series in March, 2010. According to Holkins, developer Hothead Games “[had] the chance to do something really cool with [DeathSpank]” and opted not to do the game “half-assed.”