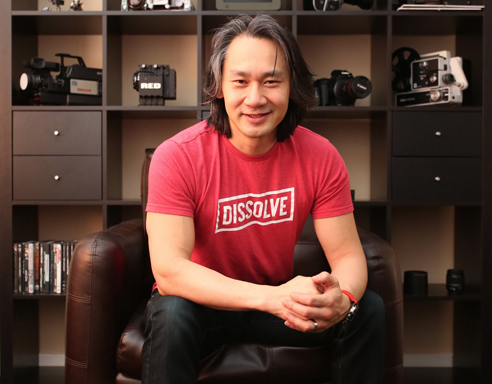 But, says founder Patrick Lor, his team faced many digital speedbumps to get to this point.

“We needed to upload hundreds of terabytes of high-quality video to our cloud server, and were faced with spending $10,000 to $15,000 a month on bandwidth,” he says. A temporary solution was found by physically shipping hard drives to Dissolve’s cloud provider, who would load the videos to its website. But, “this was obviously tedious, and we hated losing control of the final step.”

Fortunately, Lor heard about an Alberta pilot program from Cybera (a provincially-funded advanced technology agency) that is connecting select business incubators to Alberta’s high-speed research network, CyberaNet. AcceleratorYYC is one of these incubators, receiving a massive 1 gigabit per second connection in 2013, for free and unlimited use by its occupants.

Soon after this connection went in, Dissolve bought a desk at Accelerator, and was uploading videos almost immediately.

“This infrastructure has been absolutely critical for us, and has hugely contributed to our success. The money we’ve saved has gone straight into hiring more staff.

“But more than that, we’ve also found that gaining access to a connection this fast is just as (or maybe even more) important than cost. The only other ways to get access to a pipe that fast is to get one installed — but if you’re not in a fibre-ready location, that would take months — or get set up at a data centre, but that takes contract negotiations and security clearance. So, this connection at Accelerator YYC created an ideal access point for us.”

Dissolve’s website now offers over 200,000 stock video clips, and Patrick is hoping to quadruple this number by the end of the year, which will mean uploading another 200 TB of data.

Fortunately, that is an easy load for Alberta’s biggest network pipe, which transmits terabytes of data across its borders every day.