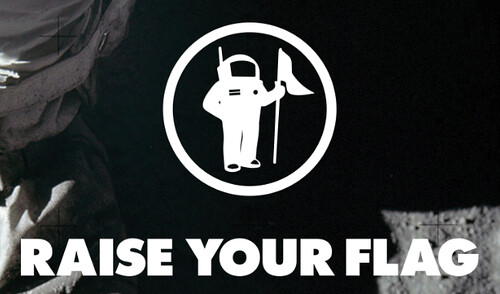 Ryan Porter was doing just fine, thanks. By all measure of how we in Canada define a successful career, Ryan had one. He was booked over 40 weeks as year as a career and motivational speaker (not the cheesy kind) for high school students and he had his first book on the market. Ryan was good to go.

Until his speaking gig at a “work-bound” (read: “not going to university”) conference in Mississauga, Ontario, that is. After finishing his presentation, a young man named Michael approached Ryan. Practically in tears, Michael said “No one in my family knows I’m here. Do you have any ideas how embarrassing it is to be the loser? I have no idea what to do with my life.”

And Raise Your Flag was born.

“The interaction with Michael changed the trajectory of my life as well as his,” Ryan told me over lunch at the JOLT accelerator here at MaRS in Toronto, where Raise Your Flag is in the current cohort (as an aside, Ryan is very serious about his lunches, as evinced by his Twitter handle and the world-class creations he gets to consume daily).

So why should we care about Michael? Or Raise Your Flag?

“Michael made your breakfast, If you crossed the street in Vancouver this morning while playing on your iPhone and a car hit you, Michael loaded you into the ambulance. Michael drives you to the airport and makes your coffee,” Ryan passionately shared. “The reality is that here’s a ridiculous first-year turnover in entry-level jobs. Crazy millennial problems. These young people leave jobs early in their career because they see absolutely no growth – they’re left with the impression that there’s no way for them to move past the cash register.”

What first attracted me to the notion of Michael is that the concept transcends gender, race, national boundaries. Michael is an everyperson, enduring the same indignities that have created a massive global crisis of youth unemployment and futures without dreams.

In addressing this global crisis, Raise Your Flag is the technology and communication vehicle that can finally make a real, tangible change in the youth employment space. Raise Your Flag can help young people succeed and build meaningful careers. Built and designed by Scott Walkinshaw and Payam Shalchian respectively, following today’s launch of v.2.0 of the site, there are few as elegant and powerful anywhere in the world in this space.

The way Raise Your Flag works is by connecting employers offering entry-level jobs not requiring degrees or diplomas with young people who want to work. These jobs lead to career paths within the same or other companies. Employers set forth career paths available within their company, usually broken down into four steps. At each step, Raise Your Flag breaks down the job in issue into its component parts, such as salary, job description, requirements, skills and what they refer to as the world styles (indoor/outdoor, physical/mental, etc). While each career path starts with the entry level job, it actually charts out your career.

If you want you be a baker, Raise Your Flag would help you become a retail worker at a bake shop or grocery store, then a baking assistant or apprentice, then a baker, then a supervising baker. Along the way, it tells you when you’ll need additional training, certifications and more.

Of course, there’s no easy fix for these issues. Ryan and his team understand that building a brand and platform from point zero is a huge job. What’s very clear, though, is that there’s no team better-positioned to get traction in this space and make the change that our society needs.