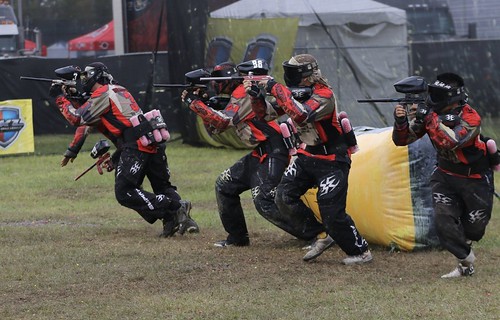 The Empire EVS combines a paintball mask design with an integrated Recon Snow2 heads-up display, enabling the delivery of real-time information like ammunition counts, field maps, and teammate locations on a display positioned just below the wearer’s right eye.

Snow2’s high-contrast LCD screen appears as a 14” image viewed from five feet away, allowing users to glance at it without re-focusing their eyes. Powering Snow2 is a 1GHz dual-core processor, an Android-based operating system, a nine-axis sensor suite, and Bluetooth 4.0, Wi-Fi, and GPS connectivity.

The Empire EVS smart paintball mask, which is both scratch-resistant and anti-reflective, also blocks 100% of harmful UVA/UVB radiation and prevents internal fogging.

“The Empire EVS showcases the versatility of Recon heads-up display technology,” said Tom Fowler, Director of Sales and Marketing, Head Worn Devices, Intel, which owns Recon. “Through our collaboration with Empire, which involved the development of paintball-specific software for Snow2’s Android-based operating system, we were able to bring the benefits of instant, direct-to-eye information delivery to an entirely new group of customers.”

“Empire Paintball was thrilled to collaborate with Recon on the development of wearable technology specifically adapted to the sport of paintball,” said Louie Spicer, Chief Technology Officer, G.I. Sportz. “Recon has proven the robustness and user-friendliness of its Snow2 heads-up display platform. With Recon’s help, we were able to extend Snow2’s functionality to enhance the paintball player’s experience in a substantial way.”