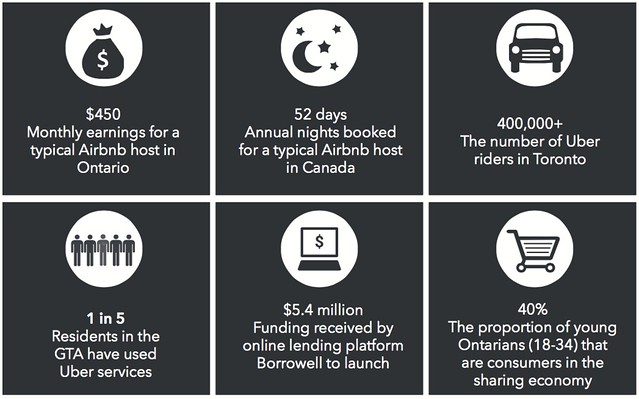 Ontario’s provincial government should move quickly to develop a comprehensive approach to the so-called “sharing economy,” according to a new report produced by the Ontario Chamber of Commerce.

“The evolution of the sharing economy presents a number of opportunities and challenges for governments,” the report says. “While some jurisdictions are beginning to harness its economic potential and tap into its benefits, others have banned companies operating in the space outright. No jurisdiction has landed on a comprehensive approach. Ontario is no exception.”

The report, released in late August, uses a broad definition of the “sharing economy” one that encompasses everything from Uber and AirBnB, to lending marketplace Borrowell and crowdfunding sites.

It’s a big sector, one that is expected to be generate revenues of over $15 billion this year, according to professional services firm PwC which collaborated on the report, and grow to $335 billon by 2025.

That’s a big part of the reason the OCC is encouraging governments to embrace these new industries.

“Jurisdictions that are building adaptable regulatory and tax frameworks are more likely to produce new technologies that will drive economic growth,” Allan O’Dette, the Chamber’s CEO told the Toronto Star.

While a growing number of Ontario residents are participating the “sharing economy,” according to research conducted by survey firm Leger in conjunction with the report, those numbers are still limited.

40 per cent of Ontarioans between 18 and 34 are sharing economy consumers, according to the report. In Toronto, where the sharing economy is the strongest, one in five residents have used Uber.

But Ontario residents might be more supportive of the sharing economy than their consumption habits suggest.

Two-thirds of them “believe that the growth of companies in the sharing economy is a good thing for the province’s economy. In the Greater Toronto Area, this number jumps to 85 percent,” according to Leger research cited by the report.

The OCC makes six recommendations in the report.

It’s asking the Ontario government to “establish a cross-jurisdictional taskforce” that would include the federal government, municipalities, “thought leaders and industry … to analyze the opportunities and impacts of the sharing economy and make comprehensive recommendations.”

It also calls on the government to “use the advent of the sharing economy” to modernize regulations across the board. In the report, the Chamber points out that almost a quarter of the rules in Ontario’s Innkeepers Act, which regulates hotels and motels, “pertain to how and when a hotel owner can place a lien on a customer’s horse.”

It also recommends that the government ensure insurance industry can provide the proper coverage for companies like Uber and keep the “sharing economy in mind” when developing new employment rules.

It also recommends that the Ontario government work with the federal government and the Canadian Revenue Agency to ensure that sharing economy participants know how to comply with tax rules and research why some participants don’t comply.

“Sharing economy companies will not be the last examples of new market entrants that grow outside of the traditional regulatory sphere,” the report says. “By adopting smart adaptive regulatory responses to the growth of the sharing economy, Ontario and Canada have the ability to act as first movers in the sharing economy space, and in doing so, be well positioned to harness its economic potential. “