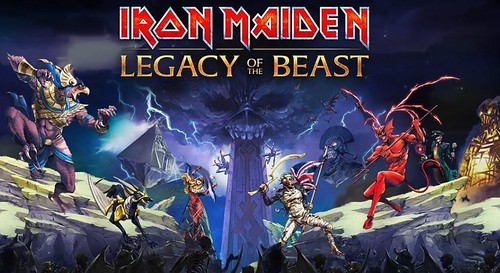 Interesting news today, heard straight from the horse’s mouth on the show floor during #BCTECHSummit—a surprise that rocked my world.

Iron Maiden is a tiny, up-and-coming band from West London. You’ve probably never heard of them.

I jest. The heavy-metal band from Leyton has sold more than 90 million records worldwide, and thousands upon thousands of high-energy live performances spanning the course of their history since 1975.

Pairing Iron Maiden with the mobile powerhouse that is Roadhouse Interactive (Warhammer 40k Carnage, Red Bull Air Race) could just be one of the best romances in the land of intellectual property and development.

RI was formed in 2009 by three extremely dedicated individuals. Rod Smallwood, the band’s manager said: “A game with tons of Maiden history… thanks to a world class Maiden-mad gaming company—now that’s something I’m very excited about.”

Iron Maiden: Legacy of the Beast will be a free-to-play RPG set in a mythical world rich with Iron Maiden lore. Starring Eddie (the band’s skeletal mascot), players will travel through time, battle enemies influenced by the vast back-catalogue of album art from the band’s vault. You will get to experience a multitude of different forms of Eddie, each with their own unique skill set and gameplay.

“As a lifelong fan, I have always thought that Maiden’s music, lyrics and cast of characters would provide the perfect basis for a deep RPG experience,” says James Hursthouse, CEO of Roadhouse Interactive. “With this game we’re creating an outstanding RPG that will appeal to all mobile gamers, including those discovering Maiden for the first time.”

The game will also include never before heard live recordings of a few of the group’s largest hits. Which will be adapted for the game by RI’s sound engineer Tony Newton under close eye of founding member, and bassist of Iron Maiden, Steve Harris.

“We know many of our fans are gamers and we have long thought that Eddie and Maiden’s music and imagery would be perfect for this. It’s something we have been looking at revisiting since Ed Hunter way back in 1999. Now in 2016 it can all be done on a smartphone so it makes it even more accessible for Maiden fans everywhere and also all the gamers out there.” says Harris.

Legacy of the Beast is slated to come out on iOS and Android by the end of this year (2016), and we expect to hear a lot more as the development process continues.