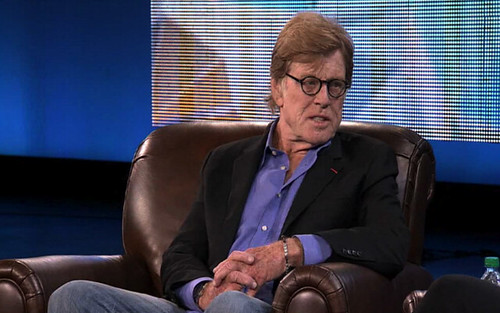 With a staggering 7,000 attendees, this year’s Marketing Summit is Adobe’s biggest yet.

A thread in the event’s loosely overarching theme of reinvention, Robert Redford—who arguably has reinvented himself numerous times throughout his storied and successful career—was interviewed by Adobe’s chief marketing officer, Ann Lewnes during the conference’s second-day keynote. Redford discussed success, failure, and risk.

“Not taking a risk is a risk,” Redford said on stage before a crowd of several thousand. “Taking risks is what propels you forward. A section of society is afraid of change, paralyzed by it. But I think change is inevitable—it’s best to go along with it.”

And if a risk results in failure? “Failure is not the end of something,” opined the award-winning actor and producer. “It is just a step along the road.”

Redford, who modestly described himself as “reasonably” successful, suggested that people should strive for success, but not obsess over it. “I have always seen success as something you shadowbox with but don’t embrace,” he explained. “Don’t get too close to success—acknowledge it and be grateful for it, but don’t get consumed by it. It can stop you from moving forward.”