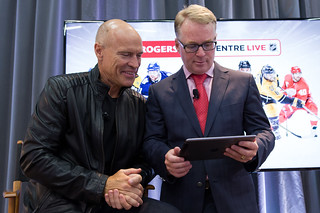 Canadians are going to be able to watch a lot more hockey games on their mobile and connected devices this season. But it isn’t going to be cheap.

Rogers, which paid $5.2-billion last November to secure the majority of NHL broadcasting rights in Canada for 12 years, unveiled its expanded NHL streaming offerings on Wednesday.

The company says its streaming service, GameCentre Live, will have over 1,000 regular season games plus the playoffs and other special events like the All Star Game.

“We’re bringing fans national games and lifting more local blackouts so they can watch the teams and players they love,” Keith Pelley, president of Rogers Media said in a press release.

But those blackouts won’t be lifted for everyone. In order to watch regional games customers will have to have a traditional, cable or satellite, TV provider and subscribe to Sportsnet, a specialty TV channel owned by Rogers.

Customers without the traditional TV subscription will be limited to games that are broadcast nationally.

Rogers decision to require the traditional TV subscription was motivated to “protect its relationship with the TV distributors it sells its Sportsnet channel to,” according to an articlein The Globe and Mail.

“There are also a number of games that Rogers doesn’t have the rights to – some local broadcasts of regional Toronto Maple Leafs games as well as those of the Ottawa Senators and Winnipeg Jets.

That means a Maple Leafs fan in Vancouver will be able to stream 48 Leafs games while one in Toronto will only get 16.

All told, a year’s worth of streaming hockey will cost $199.99. Rogers customers with high speed internet or wireless data plans will be able to stream hockey for free until the end of December. They’ll then be able to subscribe to the rest of the season for $129.99.

The company is also offering a slimmed-down french-language version – with only Senators and Canadiens games – for $59.99. That package is only available west of Kingston, Ontario.

The packages appears solidly aimed at the growing number of Canadians who are watching live sports and other TV on their mobile devices. Rogers says that “there was a 50 per cent spike in traffic during the final men’s Olympic hockey games as Rogers customers tuned in to catch all the action live on their phones and tablets.

At the moment, it doesn’t appear as though Rogers has any plans to combine streaming hockey with its other recently announced streaming video service, Shomi, which it will run in partnership with Shaw.

There’s also some good news for fan who have gotten used to streaming Hockey Night in Canada for free on the CBC’s website. Games shown on the public broadcaster will still be amiable on CBC.ca. While Rogers out-bid CBC for the broadcast rights – and will now produce the iconic program – it has committed to letting the CBC broadcast the program for the next four years.