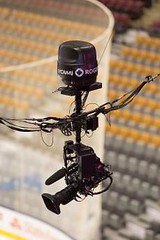 Last year Rogers signed a $5.2 billion contractwith the National Hockey League that gave the telecommunications giant exclusive rights to all games. It was the largest broadcast agreement in the history of the NHL.

“GamePlus is a game changer.  It combines the latest in broadcast technology together with mobile app technology and we’ve invested more than $10 million to create this outstanding experience. We’ve secretly tested a number of high tech cameras since early summer to make sure fans get a completely new and unique way to watch the game on mobiles and tablets,” said Keith Pelley, President, Rogers Media.

“It puts customers in control and gives them access to angles they’ve never had before on any screen.  Fans who disagree with a ref’s call can now see the game exactly as the ref sees it. They can also watch multiple replay angles of the main plays in the game.”

GamePlus features the following innovative cameras and angles, which will be used in different combinations at different games:

In pre-season testing last week, the Rogers crew was able to create up to eight camera replay angles of major plays and have them available on mobiles and tablets in less than three minutes after the action happened. “We are using so much cutting-edge technology here that it will be fascinating to see how fans want to use it,” said Pelley.

GamePlus creates an exclusive second-screen hockey experience. Fans can watch the live game on TV while pulling up the Ref Cam, Sky Cam or a MyReplay on their mobiles or tablets. GamePlus gives fans access to some of these unique camera angles for select NHL games each week plus select Stanley Cup Playoff games, the NHL All Star Game, and the 2015 Bridgestone NHL Winter Classic.