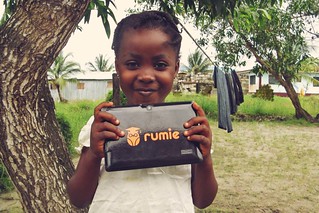 Liberian children forced to stay home from school because of the Ebola crisis are being educated 21st century style, thanks to a Toronto tech startup.

Founded last year by Tariq Fancy, a former Wall Street banker turned social entrepreneur, Rumie – its startup and operating funds came from private donors in USA and Canada – has so far had 1,000 tablets ordered and is currently in the process of distributing them around the world to Haiti, Uganda, Rwanda and Pakistan.

“If a child can’t go to the library, why not bring the library to them?” Fancy says. “If you have a device and an Internet connection, it’s possible to learn almost anything for free online. Resource-constrained and offline communities should not struggle to replicate educational systems from 20 years ago.”

The Liberia project was unexpected.

“In July, we were approached by an organization in Liberia that wanted to use our tablets at a facility to rehabilitate former child soldiers, giving them their first chance at an education,” says Fancy.

Tablets were shipped to Monrovia in July, just before the Ebola outbreak and border closure. Soon afterwards, the program was suspended because of health crisis.

The man who’d ordered the tablets decided to put them to use anyway, distributing them in his own locked-down neighbourhood. Though there are only ten tablets, the content reaches at least 100 children.

“His feedback has amazed us,” the one-time banker said.

“The kids in the community have kept busy, even while mostly confined to home, fully engaged by the interactive educational content on the devices.”

The Rumie team, with 12 people based in New York and Toronto, piloted its product in Haiti last year.

“Haiti’s devastating earthquake in 2010, which destroyed over 1,300 school, has led to one of the lowest enrollment rates in the world,” Fancy says. “Student engagement levels were extremely high. The community quickly learned of the devices and some made requests to see how they might buy more of them.”

Fancy eventually wants to Rumie to open up a repository of free content for anyone with any device to access. If it takes off, the concept, using innovative technology to get things done for less, could revolutionize how education is delivered in developing countries.

Content is evaluated with local partners to choose the best options to use for each community. Games on the tablets are unlocked when students complete work, and there’s built-in analytics to monitor progress and update the tablets.

“We tend to focus on the STEM subjects, both because it is where many of our target communities would like to see improvement and because it is easier to find culturally-neutral content in a field like math than it is in literature,” Fancy contends.

The technology is also being used in Canada too, in First Nations communities in Northern Ontario, and Rumie is expanding to serve children in the US, Kenya, and Peru.