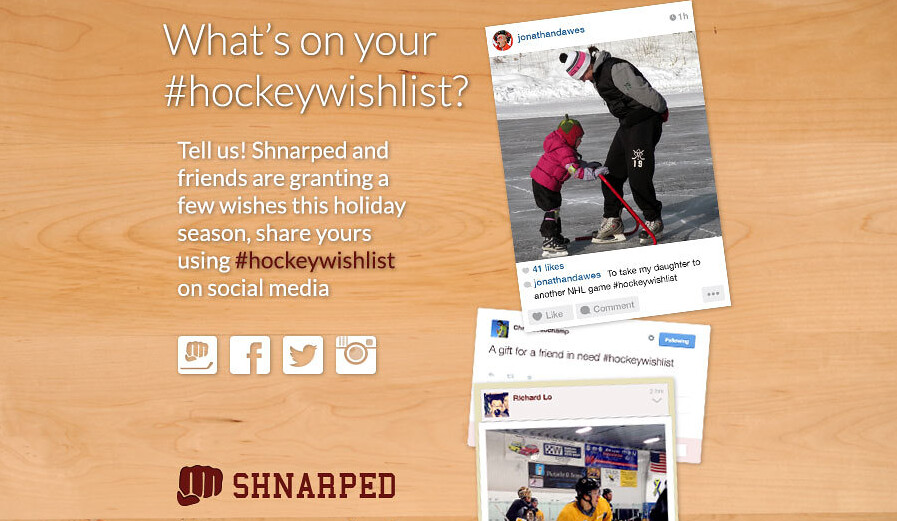 Ho ho ho! Shnarped, the Vancouver-based startup that created a social platform for hockey fans, is ready to unveil its new #HockeyWishList campaign that will seek to play Santa this year and answer a few lucky users’ wishes.

Dustin Sproat, one of Shnarped’s two cofounders, told us that the company will try to answer fans’ wish list requests this holiday season on Twitter, Facebook and Instagram. Whether it be a signed hockey stick, a jersey, or maybe even something involving a player, the company is going to try to work a bit of Christmas magic.

“We plan on granting wishes every two to three days. We have about 50 teams and 150 players involved with the app, so if we see the right requests maybe we can go to the teams and approach them,” said Sproat. “We’re going to roll with it and see how it plays out.”

Shnarped is an app that allows hockey fans to stay informed on the latest scores and stats, engage with a positive, youth-friendly community that includes fans and players. Most importantly, fans can actually communicate directly with NHL players that use the app through “Pounds.”

The reason the app actually exists as a startup revolves around a charitable endeavor. Sproat and cofounder Kyle Hagel both played and studied at Princeton University, and both went on to have careers in the AHL (for Hagel, his continues today with North Carolina’s Charlotte Checkers).

About nine teammates that attended Princeton who went on to play in the minor leagues decided to create a charity called Hockey Players 4 Kids a few years ago. Central to its mandate was “Stick to Reading,” an incentive-based program that encouraged kids to read. Those who read the most books were able to play floor hockey against a few professional players. The program has now been held more than 30 times in cities across the world.

“Out of Hockey Players 4 Kids we had this great player network of good guys who wanted to do good things, and Shnarped was a way to scale the player-to-fan connection to make it even easier for the guys to reach more and more people,” said Sproat.

It seems to be going well. Just like an opportunistic minor-leaguer trying to do everything to be successful on the ice, Shnarped raised a healthy amount of capital without ever consulting with a venture capital firm.

In one of Techvibes’ more popular pieces over the last few months, Sproat detailed how his startup efficiently raised over $1 million, while still owning and controlling over 70 percent of the company.

One of the only people who gave them risk capital was Jim Treliving, the notable Dragon from CBC’s Dragons’ Den, where Sproat and Hagel appeared on the show, but finalized their deal after.

For now, the guys are continuing to work on strategies that will enable fans to communicate and discuss in the app while sharing content outside of it.

That, and of course playing Santa for all those fans who will be telling the world of social media what they want for Christmas, along with #HockeyWishList.