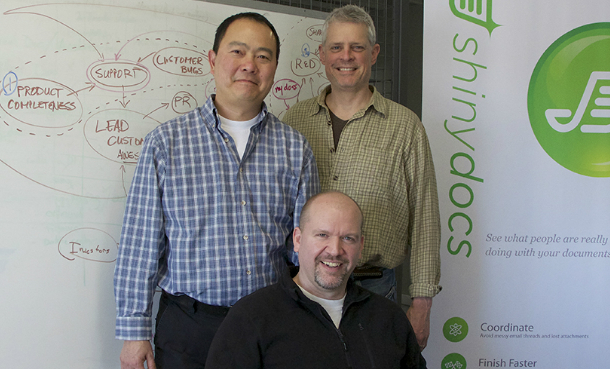 It’s not unusual to find a startup in stealth mode in the lead-up to launch. It’s somewhat less common to find an off-and-running startup whose product is stealth itself.

How do you sell something whose chief value proposition is that you don’t even know it’s there? That’s the challenge – and the opportunity – facing Jason Cassidy and his team at Shinydocs, a seven-person software operation tucked upstairs in a nondescript grey building, beside the railway tracks, in central Kitchener.

Their most promising product, Shinydrive, overcomes a big, boring and expensive problem: the reluctance of office workers to store and share documents on company systems, and their risky reliance on local desktops and cloud solutions like Dropbox for these functions. Shinydrive promises to dramatically boost employees’ use of company enterprise content management (ECM) systems, by essentially hiding those systems behind a simple, shared drive with a familiar interface.

“It’s doing all the permissions, categories and attributes, records management; it’s doing all your compliance in real time while you’re interacting with it, but as an end user, you don’t have a clue,” Cassidy told me this week at Shinydocs’ office on Ahrens Street. “There’s no such thing as figuring out our system; either you’ve used Windows or your Mac before or you haven’t, and if you have, then you know how to use our system.”

For companies, it can mean the difference between 20 per cent (and sometimes far lower) employee uptake of elaborate ECM systems, and 100 per cent adoption with zero training required. That sounds like a bold claim until Cassidy tells you about the first major Shinydrive deal the company recently closed with the City of Derby in England – a major customer of Waterloo-based OpenText’s ECM software.

Read the rest of this article on the Communitech News site.