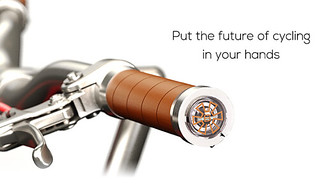 It’s that time of the week when we look at what creative ideas Canadians are raising money to support.

Check out these Canadian crowdfunding picks-of-the-week:

Connected bikes are staring to appear but they’re very expensive and a lot of cyclists are pretty attached to their bikes and wouldn’t want to replace them. That’s where these connected bike grips come in, turning ordinary bikes into connected ones.

The device slides into a bikes handlebar. From there, it guides riders to upcoming turns through vibrations – the left grip vibrates before a left turn and the right for right turns, allowing riders to directions from a navigation app without taking their eyes off the road.  If the navigation app being used has information about upcoming road hazards, the rider will be notified about that as well, through sounds and vibrations.

The app also has a tracking feature – which could be particularly useful in cases of bike theft – there is a bit of a catch, another smrtGRiPS-enabled bike has to come within a hundred metres of the missing bike in order to find it. If a user’s bike is closer, but they can’t find it – say its parked in a large bike rack outside a big university – they can use the app to have their bike make a sound and signal its location.

The campaign is looking to raise $50,000 and is making some good progress. $64 gets early birds the grips.

This open world massively-multiplayer online roleplaying game sounds like a cross between Grand Theft Auto and Second Life. Players will be able to play as criminals and commit crimes or play as the cops and track them down; or they could do something totally different and start an in-game business or go hunting in the woods.

The Ottawa-based group developing the game says there will be little AI in the persistent world and as much as possible will be controlled by players. It’s extremely ambitious but John VanderZwet does have some experience, having worked on MMORPGs before.

The campaign is trying to raise $150,000 and with some time to go, it’s raised a big chunk of that. A $10 contribution gets game access with higher contributions getting various in-game perks.

Medical apps are becoming more and more prevalent but the developers behind this campaign say there’s nothing out there for people suffering from the short-term memory impairment that comes with severe autism, Alzheimer’s disease and other forms of dementia.

This app isn’t just aimed at people with those conditions, it’s intended to help them. Though simple exercises and customization, the app’s Toronto-based creator says it can be targeted to a specific user and improve their memory.

The app is developed and the proceeds of the crowdfunding campaign will go to cover the cost of translating it into additional languages, creating an Android version and adding additional features. The campaign has already surpassed its modest goal of $800. $5 gets backers the app.