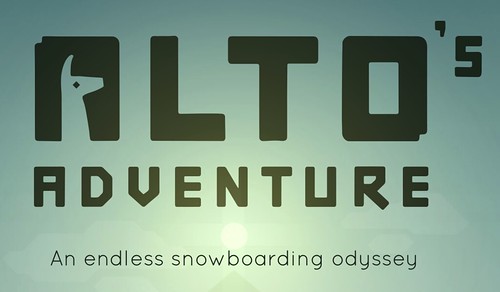 Snowmen, llamas, skiing, and beautiful scenery, what do these all have in common? Alto’s Adventure. Which as of this week is available (finally) to Android users.

Alto’s Adventure is a game you’ve probably just barely heard of. Why? Because with its limited iOS release, Snowman (the studio behind the hit game) got nearly all the recognition, and award nominations it possibly could with a mobile game. It’s Canadian too, developed in Toronto.

What took the team a while, attempting to port the game from one app store to the other, was their careful consideration of the audiences.

In what seems to be the first publicized case of a developer sincerely treating iOS and Android as two different “systems,” Snowman—who released Alto on iOS for a fixed price—decided that the ecosystem of Android users would benefit from a Free-To-Play model. The decision was made on the fact that the two ecosystems are indeed, vastly different in character.

“After playing games such as Crossy Road andThrees! Free we began to understand that free-to-play can be done in a very tasteful and respectful manner,” said Snowman co-founder Ryan Cash. “We also heard about the crazy levels of piracy on Android, and wanted to ensure that Alto’s Adventure could be as accessible as possible for everyone, while still being good for business.”

So much of it is true. With both cases. The piracy for full-priced games is rampant, it’s a difficult environment to develop for. Snowman has also managed to bring Android users a beautifully crafted game, gated at failures, all free to download right now, without it feeling like they’ve deviated from the original charm of the game.

“We wanted to ensure we gave the platform the care and attention it deserves – to deliver the same quality experience fans have come to know and love,” said Cash.

Alto’s Adventure gives you an opportunity to play a rare atmospheric experience on mobile, so be sure to plug in your headphones. The gameplay is a simple, expanded-on auto-scroller where you (Alto) have to ski downhill to capture your escaped Llama, returning them to your farm. On your way, there are plenty of opportunities to bust out some backflips, and wire grinds. So get to shredding.

Accompanied by awe-inspiring music, and breath-taking backdrops, Alto’s is a treat from start, to inevitable wipeouts, and the monetization doesn’t feel scummy. The entire package is endearing, and now beloved to Android users worldwide, as they can now vacant the pout corner, and enjoy this game like their iOS brethren before them.