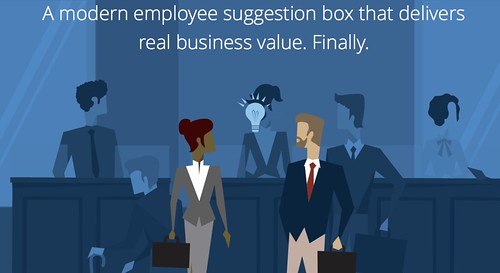 At the age of 19, Brennan McEachran walked into the office of the President of Ryerson University.

Little did he know, he would walk out with a business.

“When I was in my first and second year, I noticed that the problems I was experiencing were recurring. Other friends had the same problems. We had ideas for how to fix them, and nowhere to put these ideas,” said McEachran, this year a finalist for Entrepreneur of the Year in the Canadian Startup Awards.

What he discussed then President Sheldon Levy that day weren’t revolutionary changes, but simple, innovative ideas that would improve the overall operations of the university for students and faculty.

“They were hungry for these raw, actionable insights. I thought, ‘wouldn’t it be great if we gave every student at Ryerson the same opportunity you just gave me right now?’”

This is where Soapbox was born, through small ideas that make a big difference, and this is what the startup stands for today. Having landed their first major client in 2011, the innovation management platform has been adopted by big name brands such as Indigo, Coca Cola, Sick Kids, and to this day, Ryerson University.

Once Graham McCarthy and Warren Tanner came on board in 2010, the three founders bootstrapped the business for as long as possible, until they attained their first client in 2011.

Being just 19 when he launched Soapbox, McEachran eventually switched to night school, giving him more daytime hours to focus on growing the business.

“The basic tactic was just to fight as hard as we can every single day and waking up before the competitors the next day,” he says.

He describes the most difficult part of building awareness for Soapbox was determining which market they’d be operating in. With very few companies to compare themselves to back in 2010, though several platforms have emerged since then, McEachran, McCarthy and Tanner found it challenging to join an existing market.

“The biggest challenge was actually, ‘how we teach people that this product exists and show them that this is a solution?” says McEachran.

Therefore, the team went on to create their own market. Since then, McEachran says the real value in Soapbox has proven to be giving front-line employees the opportunity to share their insights in a constructive way.

“It really connects with the next generation of workers, those who have grown up in a fundamentally different environment where your ability to impact the world is just one tweet away.”

Soapbox is just one of many platforms that exist to promote employee engagement and creativity. Others include Officevibe, Teamphoria and Achievers. McEachran states that Soapbox and other platforms like it will be an essential part of the modern enterprise.

“Businesses are changing at an incredible pace. I think the definition of innovation has changed in the eyes of business leaders.”

He reflects that changes don’t have to be big to be effective, and wants Soapbox to contribute to a culture that constantly finds new ways for humans to interact and grow.

“Really, one of the interesting things Soapbox provides, is that is brings that mentality into the everyday. It’s a mix of this technology revolution that’s coming to businesses, and seeing the benefits of an innovative approach to running businesses,” he says.

He goes on to say that recognizing and implementing the ideas of customer-facing employees gives companies a one-way-ticket to what their clients need.

“Front-line employees who talk to customers and build the product can see these changes coming from a mile away. Soapbox allows big companies to act like nimble startups,” McEachran says/

What’s even more significant, he explains, is the ability to give every employee a voice. He notes that with steadily declining rates of employee engagement, companies need to ask themselves whether their employees feel heard.

“The more powerful thing is a workplace where everyone feels they can make an impact.”