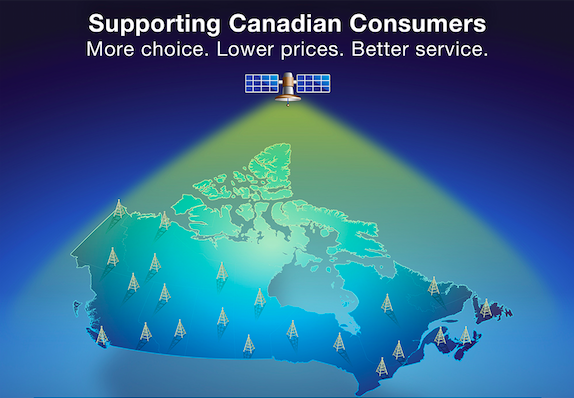 The rules shape an important forthcoming auction of wireless spectrum next March.

Canadians pay some of the highest prices for some of the worst cell phone service in the industrialized world—a direct result of the lack of choice in a market that is over 90% dominated by just three giant Big Telecom conglomerates. Smaller, independent wireless providers need spectrum to be able to offer real choice to Canadians, according to Josh Tabish of OpenMedia, a Vancouver-based pro-Internet organization. The Canadian government agrees.

“To support more competition and choice in the wireless marketplace, 60% of this spectrum will be set aside for operating new entrants across the country,” Industry Canada said in a statement, referring to upstarts such as Wind Mobile.

“The remaining 40% will be open to all qualified bidders,” the government added, referring primarily to the “Big Three” of Rogers, Telus, and Bell.

In 2008 several small players formed, including Public Mobile and Mobilicity, launching publicly in 2010. But Public Mobile was snatched up by Telus while Mobilicity has suffered from perpetual financial problems.

Only Wind Mobile, the largest of the newbies with more than 800,000 subscribers, has seen any form of success. Yet even Wind has fallen well short of its own expectations; it anticipated having 1.5 million subscribers within a couple years of launching—four years on, it has failed to reach even one million.

“True competition means better wireless packages and lower rates for consumers,” said Wind Mobile’s Chairman, Anthony Lacavera, upon learning of today’s announcements. “The Federal Government’s commitment to sustained competition from a fourth carrier in every region is entirely in the best interest of Canadians.”

In the most recent wireless spectrum auction, the Big Three gobbled up the vast majority of the spectrum—as they have with all prior auctions—forcing Wind’s network improvement into stagnancy. “In 2006, 98% of mobile spectrum was concentrated in the hands of Canada’s largest wireless companies,” Industry Canada said. “By May 2015, new competitors will have an opportunity to hold over 25% of total mobile wireless spectrum.”

Perhaps this new policy framework will finally propel Canada’s wireless market into a genuinely competitive state. But, jaded as we’ve become, don’t expect us to hold our breath.