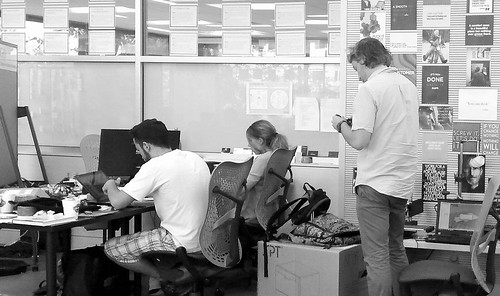 The first cohort to graduate from McGill University’s X-1 startup accelerator is a unusual mix.

While some are attempting to commercialize products based on serious scientific research, one has no real product and another startup that pitched at the accelerator’s demo day has already stopped operating.

The demo day, held on Sept. 9, began with pitches form some of the startups to win at The McGill Dobson Cup, a business plan competition open to students, alumni, faculty and staff of the university.

The first to present was Tailor2go, a mobile tailor shop that uses a 3D-scanner to take 450 measurements in five seconds that allows it to make custom suits and shirts for men that “fit before you buy anything,” according to founder Nathon Kong.

Once a customer has been scanned, they can order further products from the company without needing to be re-scanned, because it already has their data.

While Tailor2go hasn’t opened to the public, it’s already have 70 customers and generated $35,000 in sales in two months.

But Tailor2go, like all of the Dobson Cup winners that pitched at the event, isn’t a graduate from the X-1 accelerator.

Instead, it’s affiliated with the District 3 Innovation Center at nearby Concordia University, Montreal’s other English-language university.

It was followed by Chic Marie. Founded by former corporate lawyer Marie-Philip Simard, it rents business wear to professional women. Like Tailor2go, Chic Marie hasn’t launched publicly yet. It’s currently in testing with 70 customers paying $90 a month and over 500 women on a waiting list.

Rounding out the Dobson Cup winners was E-Innovation. It has developed an electrochemical and spectroscopic scanner that’s being marketed as a quality control tool for the pharmaceutical industry.

Tomer Noyhouzer, the company’s vice-president of research and development says that it’s more sensitive and reliable than any other product currently on the market. It’s also less expensive, he says.

Some of the X-1 grads were also scientifically focused. Ananda has developed a nanotechnology product that allows spinal cord cells to be grown in a similar way to how they grow in the body.

While the startup has done work in several markets, founder Margret Magdesian says it’s planning to scale-up and focus on the $14 billion in vitro fertilization market. It’s also in the process of closing a seed funding round.

Also pitching was Sensequake. It uses a system of sensors to detect all the ambient vibrations in a building, with that data and it’s software, it can predict an earthquake will affect that building.

Sensequake says it will be able to provide more accurate results that current methods, which usually involve buildings models, in a shorter amount of time.

The startup is currently licensing its technology to universities and plans to develop a software-as-a-service product aimed at engineering firms.

But not all the startups pitching seemed to have thought as much about their go-to-market strategy.

Haply has developed a small device called the “haplet,” it clips on to a tablet and allows users to to get tactile feedback about objects on the screen. At the startup’s demo booth, users could play with a pong-like game with the device and feel the momentum of the ball when it came back to them.

It’s an interesting concept, though Haply seems unclear about how it will be used. During his pitch, founder Arash Mohtat mentioned plans for a Kickstater campaign and targeting the maker community but also said there were possibilities the device could be used to help visually impaired people control computers.

The strangest “pitch” of the night was from Ahvoda, a TaskRabbit-type service aimed at providing restaurants with on-demand labour.

It had already stopped operating.

Rounding out the night was the Silent Disco Squad, a group that wants to promote bring-your-own-device dance parties.

Silent Disco Squad’s pitch seemed to suggest that it has developed an app that’s already being used to organize events and has reached thousands of people.

But the app doesn’t actually exist yet and the events referenced during the pitch were organized on Facebook.

The startup does have a website where people can apparently share live content from events, part of what they say the app will do, but it doesn’t appear to have any users.