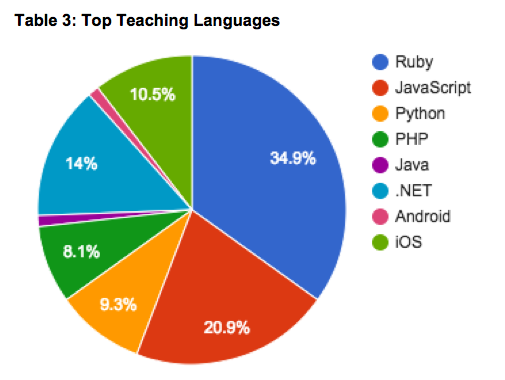 In 2014, bootcamps across North America graduated roughly 6,700 students. This year, that number is expected to more than double to 16,000.

To compare, there were approximately 48,000 undergraduate computer science graduates from accredited US universities in 2014.

This is according to Course Report’s 2015 Bootcamp Market Size Study, which for the second year has measured the size and impact of coding schools in North America.

The report briefly covers some Canadian stats. Stats show that six Canadian bootcamps graduates 480 students last year. This year, that number is expected to nearly double to 927. In 2015, it’s expected that these six bootcamps will generate up to $8 million combined.

The average price of tuition for a coding school is $11,000, according to the report. The average program length is 11 weeks.

Ruby is the most common teaching language, used in 39% of courses, the study says. Bootcamps will graduate 9,748 Ruby developers in 2015. JavaScript has gained popularity, now accounting for 23% of courses.

Canada has a long way to go to catch up to the US in terms of academy quantity, however. Our entire country boasts  a modest six coding schools, according to Course Report, while San Francisco alone has 12, New York nine, and Seattle eight.