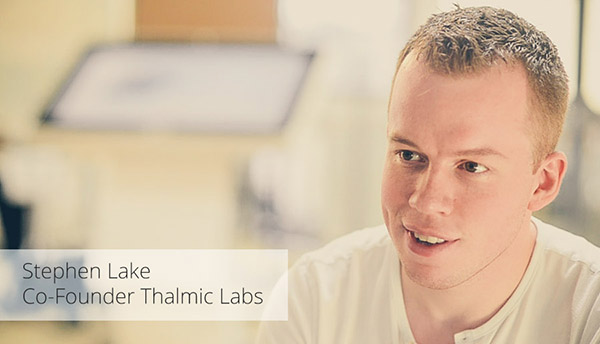 Thalmic Labs may have started shipping its flagship product, the Myo armband, but some things haven’t changed since the company was named 2013’s Startup of the Year.

“Internally it doesn’t feel that much different than a year-an-a-half ago,” says Stephen Lake, its CEO.

This year, Lake is a finalist for Entrepreneur of the Year at the 2014 Canadian Startup Awards.

“The past few months have been busy,” he says. “More so than usual.”

Within the past six months, Thalmic Labs has “shipped roughly half of the pre-orders” of its Myo motion control and gesture control armband and launched an app marketplace for the device.

But Lake says that for the company, there hasn’t been a transition from research and development to product company.

There have been some shifts, though. For the first six months to a year of Thalmic Labs’ life, Lake says he was “very hands on.” Now,
he say he spends most of his time managing.

It wasn’t easy to realize that he could be “more effective and impactful by being less hands-on,” he says. “That was definitely a hard realization at first and it took some time.”

But it’s become more important as Thalmic Labs grows beyond its initial co-founders.

“We have an amazing team now of very smart people, far smarter than us,” Lake says.

He’s seen the team come together when they had to.

“We had this deadline for the day we wanted to ship the first pre-orders,” he says. “We still had a lot of things that had to come together in a pretty short time.”

They hit the milestone.

“Everyone put their heads down,” he says. “The entire team worked so well together.”

But there are still big challenges ahead. “It’s not like we’re working in a eel-defined market,” he says. “It’s a really new category.”

He says calls have to be made based on where they thing the market might go.

“We’re trying to create one version of what we think the future might be,” he says.
That’s a hard thing to predict.

“We kind of had a theory early on, we turned out to be wrong, that users would be interested in gaming, he says. Instead, medical and home automation applications have proven more popular.

“The breadth of what those first adopters are interested in is very wide,” says Lake.

It’s something Thalmic Labs has incorporated into their development process. “We’ve spend a lot of time with these people, working with them and learning from them,” Lake says.

While a traditional product gets built and then “unleashed to the world,” he says. “As a startup we can’t do that with a closed door.”