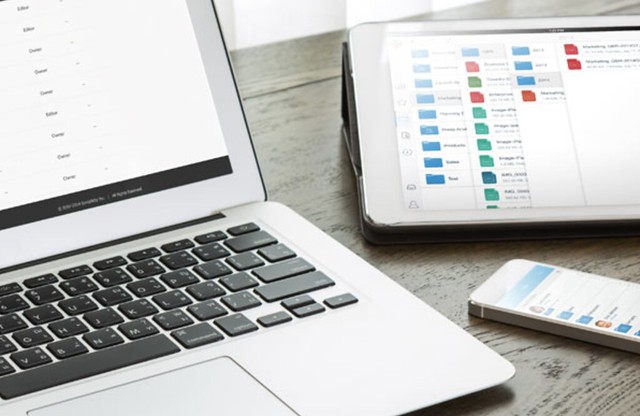 If your business wants to share files, it has a few obvious choices: DropBox, for starters, as well as offerings by Google and Microsoft, plus Box, of course.

As a consumer or employee, you know file sharing apps can boost productivity—but you can also probably sympathize with your head of IT, who laments the aching lack of security features these services come with. It’s a private data nightmare just waiting to happen.

Enter Syncplicity. Launched by three former Microsoft employees in 2008 and acquired by EMC in 2012, Syncplicity calls itself “Dropbox for enterprise.”

There’s also a slew of policy, control, and admin powers and settings, allowing even the largest companies to keep a tight lid on work-related file-sharing among tens of thousands of employees. But Syncplicity isn’t missing any of the stuff people love about Dropbox, either: seamless syncing across devices, free data, and no need for people to have an account to download stuff. And in terms of data, the service doesn’t “double dip” when two people share information like Dropbox does.

Syncplicity sounds like a bore at first because, with all its features and seeming focus on the enterprise, it’s hard to picture an experience as smooth and simple as Dropbox. But it is. And this is because user experience is actually extremely important to the folks at Syncplicity.

“We are maniacally focused on the user experience,” Syncplicity’s general manager, Jeetu Patel, told me earlier this week at EMC World in Las Vegas. Patel believes Syncplicity’s user experience is so slick, it in fact makes consumer-oriented apps like Dropbox seem outdated.

And, honestly, he’s right. I’ve been happy using Dropbox until now. But after testing Syncplicity, I can’t see myself ever going back.