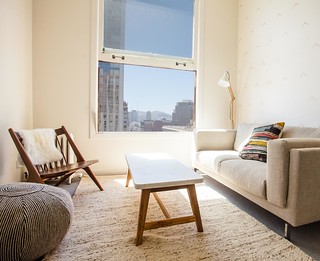 Montreal’s Breather announced today they have closed a $6 million Series A round led by RRE Ventures. Also contributing to the round are Real Ventures, SOS Ventures, and Gary Vaynerchuk.

The funds wll be used to expand Breather’s network of “for-rent, amazingly designed, affordably priced, 24/7-accessible private spaces, in which busy urbanites can work, meet, relax in personal oasis of peace and quiet”.

Breather expanded from 3 to 12 locations in New York City alone in just under six months; the company projects it will offer 100 additional locations within the next year, serving thousands of hours of peace and quiet per week.

“Real estate is one of the most illiquid and opaque markets in the world, and when we started Breather, we knew we had a crazy road ahead of us, and a huge opportunity if we could make it work.” says Julien Smith, CEO of Breather.

“What was shocking to us isn’t that it worked, but that it worked so well so early. We have actors using the space for rehearsals, business people using the space to make calls and use the wifi, clothing designers using the space as pop up shop locations, and meditation teachers/life coaches using the space for one-on-one sessions. We hear new stories every day about how our members find our spaces useful. There are thousands of active users and reservations in the system every month. Our utilization is beyond anything else in the industry, with people returning often and, even more often, telling their friends.”

Smith projects exponential growth in Breather’s future, following its successful Series A round: “We are excited to announce our San Francisco launch with our first three locations in Powell, South Park, and Montgomery sections of the city now available for rent. We look forward to bringing Breather to many more cities in upcoming months. We have validated a ton of assumptions around our work, and now we know we can move fast.”