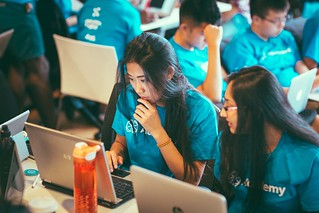 Growing up, we were told to dream big and let our imaginations run wild.

What these things mean has changed in recent years. More and more, it is becoming possible for those seemingly crazy ideas in our heads to become a reality.

Have you ever had a thought that was too difficult to express in words? Something that you wanted to say but just didn’t know how. Learning how to code is like studying a new language—you learn how to read and write in a way that computers and fellow programmers can understand. With the ability to express yourself through code, you unlock a world of possibilities that translates to infinite potential.

Giving opportunities to students at a young age is a key component of effective engagement. Inspired by the desire of students to learn how to code, the BrainStation Summer Academy was launched with the support of Konrad Group, AOL, Deloitte Digital, PayPal and Communitech.

This past weekend, 100 students from Toronto, Vancouver, and Waterloo began a specially tailored four-week Intro to Web Development course. All students in the Academy have full scholarships to access a leading curriculum that builds their digital literacy. In teams, students have begun to plan, test, build, and market their own web pages.

Coding is a very special skill that everyone should have the opportunity to learn. It is highly sought after by schools and employers globally.

When coding, you are in control. It is no surprise that programmers quickly learn how to be better problem solvers and critical thinkers.

Individuals use these abilities to creatively take on large scale projects. Through computer languages, one is able to generate tangible outputs by instructing the computer on how to behave.

Coding empowers individuals to be content producers. What is really powerful about this relationship is that everyone is given a platform in which to express themselves.

As Canada faces a talent shortage in the areas of technology, it is becoming increasingly important to engage youth to fill the demands of a growing sector. Effective participation in the digital economy will give provinces like Ontario the push it needs to become a high-tech corridor. Throughout this month, 100 students across Canada participating in the BrainStation Academy will be leading the way for Canadian youth to be the next generation of creators.