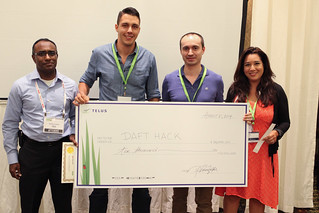 20 teams. 70 people. One room. 30 hours to build something to make Whistler the “smartest, most connected resort destination in the world.”

That was #GrowHack2014 in Whistler last week.

In the end, “Team Daft Hack” (TDH) took away the $10,000 cheque from Telus. They did it by creating JumpSquad, a real-time, real-space multiplayer competitive context via Recon heads up display (HUD) wearables. Then they rewarded peak experience with Kiip “moments,” redeemable with Whistler merchants.

Moderated by Internet of Things (IoT) expert Jim Dunlop, CEO of Cycle30, the opening panel set the stage for the hackers. “Whistler Municipality, Whistler Blackcomb Resort, Gibbons Hospitality Group, Tourism Whistler, The Chamber of Commerce – they were all really engaged in the process, ” says Tiffany Chester of WavefrontAC, Vancouver’s wireless tech accelerator and organizer of #GrowHack2014.

What were the Whistler judges looking for? Something that, while technologically interesting, would have real-world impact on Whistler’s business of guest experiences.

“We had some jitters after hearing the stakeholder panel,” says TDH’s Jeff LaPorte. “But we know what Whistler’s about: mountain sports. We figured that JumpSquad would capture people’s imaginations.”

“The app gamifies mountain sports by adding a layer of competition to those experiences,” says TDH’s engineer Phil Jama. Think jump “points” flashing across your buddies’ HUD (fitted into ski goggles) as you get air time. Think competing to get the most points as you race to the bottom of the hill. Think about reliving the win courtesy of Kiip rewards later that evening in a Whistler restaurant or bar.

Whistler is about skiing, snowboarding, BMX and mountain biking.

“We envisioned JumpSquad as built-for-Whistler,” says LaPorte. “It’s about high jumps, competing with people on the same track at the same time, moving fast.”

“We were shooting for real-time interaction – like a multiplayer video game,” says TDH’s Jama. The Kiip connection was a late-in-the-day stroke of genius that connects guest experiences on the mountain with local businesses in the Village.

TDH had the idea, but on the morning of Day One they still weren’t sure whether they could put the pieces of the puzzle together.

“We hadn’t worked with the Recon platform,” says Jama. “There was a lot of uncertainty. We knew we’d have to improvise.”

LaPorte agrees. “We wanted to use Parse, the Facebook platform, but couldn’t with our real-time needs. That meant we had to pivot our server backend twice during the hack.”

The team credits huge support available to all teams – including hands on help from Kiip’s Brian Wong and folks from Recon. “In the end, we got more done than we expected,” says Jama.

TDH has been approached by several companies offering to help support the development of JumpSquad. Jama and LaPorte are taking some time to step back from the event before committing.