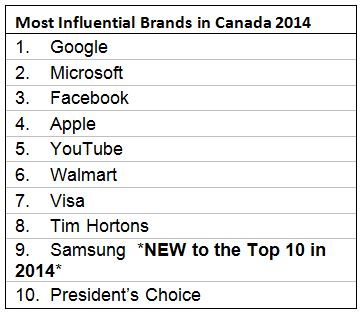 The Institute of Communication Agencies in partnership with Ipsos Reid this week unveiled the Top 10 Most Influential Brands in Canada at day two of FFWD: Advertising & Marketing Week 2015 in Toronto.

The Most Influential Brands Study examines five key dimensions that define and determine the most influential brands in Canada, including Corporate Citizenship, Engagement, Leading Edge, Presence, and Trustworthiness.

“What is a brand?” asks Steve Levy, Chief Operating Officer at Ipsos Reid in Canada. “Brands have influence and in many cases, that influence has changed our world. We’ve once again measured the various drivers of influence—which brand is the most trustworthy, has the most presence, or is most engaging. More importantly, we’re able to see some trends and changes brands exert over Canadians, which gives brands something we can measure: influence.”

The majority of brands in the Top Ten remain decidedly within the tech, digital and social media sectors, followed by the retail and financial services sectors. The only new addition to this year’s Top Ten list is Samsung. The study found notable differences in the way genders, generations and regions perceive brands. Men are more likely to rank tech and digital brands ahead of retail brands, whereas women are more likely than men to feel the influence from retail brands that deliver value and choice, such as Walmart, President’s Choice, and Amazon.

It should come as no surprise that Millennials score tech and social brands highest, with Google, YouTube, Facebook, Apple, and Microsoft topping their list. The three top Brands on Fire –Twitter, Netflix, and LG – also rank highest with this connected and tech-savvy generation. On the other hand, Gen Xers and Boomers rate Microsoft as more influential than their younger counterparts.

Netflix was dubbed the most “on fire” brand in Canada last year, leaping 18 spots from 36th to 18th.