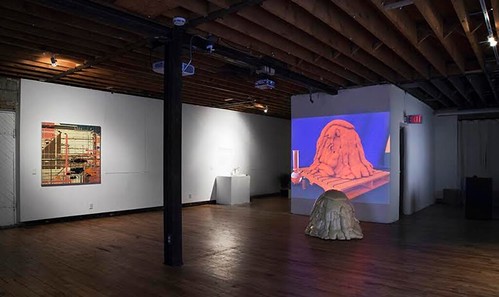 While some see visual art and high tech as two separate entities, they fuse together to make unforgettable art at InterAccess.

Artists Nina Beveridge, Bill Perry, Paul Petro, and Geoffrey Shea, who worked with the Telidon to create technological art, founded the space in 1983.

“The Telidon was an alpha-numeric videotex protocol able to send and receive information,” says Susan Kordalewski, General Manager at InterAccess, “allowing for the creation and dissemination of computer graphics and text.” Technology has come a long way since then, and the Toronto gallery and educational facility continues to dedicate itself to merging art, science, and technology.

Kordalewski says that at the time InterAccess was founded, media art was largely excluded from most public galleries. This has changed greatly, with electronic art and digital mixed media pieces being seen by a wider audience at places like the Art Gallery of Ontario, and art festivals like Nuit Blanche.

“As new technology comes into existence it simultaneously represents, and comments on, the cultural atmosphere of the time and place in which it originated,” says Kordalewski. This is what makes art influenced and created by tech especially distinctive.

“What is unique about the work that InterAccess shows is that, as new artistic media are invented, or old media adapted, there is an opportunity to consider the implications of the media itself, alongside the content of the work,” says Kordalewski.

Rapid advancements in technology mean the possibilities for new and stimulating art are endless for InterAccess and artists in general that create artistic works with high tech components. Come February, InterAccess is launching a new exhibition that will incorporate the theme and aesthetic of drones.

“The exhibition will feature image-based artworks as well as sculptural and fiber art,” says Kordalewski. “The multi-disciplinary show engages with the conceptual implications of the drone as an artistic media as well as a military device.”

InterAccess’ other exciting artistic and technological endeavor was their recent announcement of acquisition of the Vector Festival, a pioneering game and new media art festival that was founded in 2013.

“The debate about if games are art, or not, or if it even matters, has been raging on in the art world for years,” says Kordalewski.

Vector’s 2016 Festival is scheduled for July 14-17 and will be curated by two of the Vector founding members, Skot Deeming and Martin Zeilinger.

The current exhibition at InterAccess is Once Removed, which explores whether the digital process of making technological art can remove the artist and create autonomous pieces, ends on December 19.