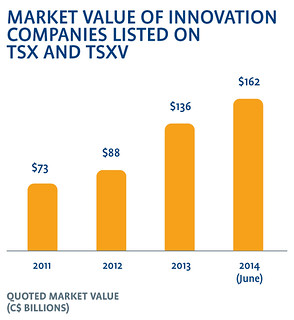 After an uncertain first decade of the 21st century, Canadian technology companies have been mounting a comeback on Canada’s leading public equities markets, Toronto Stock Exchange (TSX) and TSX Venture Exchange (TSXV). The performance of the innovation sector – comprised of the technology, clean technology, renewable energy, and life sciences sectors – on the two exchanges has thrust it back into a well-deserved spotlight and is giving companies (and their backers) new options for raising capital.

Some of the world’s most exciting technology and innovation companies are being founded, built, and funded in Canada—and investors from around the world are taking notice.

These investors, though, aren’t just venture capitalists. As companies with an impressive depth of talent and dynamism turn to public markets to help them achieve their growth plans, demand is growing among public investors seeking to diversify their investments beyond typically dominant sectors such as mining and oil.

To put things into perspective, below are some key statistics about the innovation sector on TSX and TSXV:

Not bad for a sector that some in Canada called “in decline” only a few years ago.

But what does this all mean? To put it simply, investor appetite for good quality innovation businesses remains strong, and companies of all sizes from Canada and around the world continue to be attracted to the Canadian market. Led by companies such as Open Text (TSX:OTC) and Constellation Software (TSX:CSU), as well as more junior companies including Stellar Biotechnologies (TSXV:KLH), Sphere 3D Corporation (TSXV:ANY), and new entrant Keek (TSXV:KEK), Canada’s public innovation sector is proving to be one of the world’s most robust.

It’s important to point out that public markets are not just reserved for billion-dollar companies. TSXV, the “junior” exchange to TSX, is recognized globally as a leading growth platform for small and medium- sized enterprises (SMEs) who may consider themselves too small for public market transactions in other markets, including those in the U.S. In 2013, for example, 35% of the innovation companies that went public on TSXV had market values below $10 million. SMEs often need less than $5 million to fuel their growth, and listing on TSXV can provide an attractive alternative to Series A or B financing rounds for some startups. Last year, the average size of a financing in the innovation sector on TSXV was just under $2 million, and the companies each completed, on average, about two public financing rounds during the year.

Raising public equity capital on TSX and TSXV is not the only funding option out there. You just have to read the headlines about private companies like Freshbooks, Wattpad, Shopify, Vision Critical, HootSuite, BuildDirect, Clio, D-Wave, Desire2Learn (and many, many others) to know that venture capital money from around North America is playing a hugely important role in funding the next wave of technology leaders in Canada.

In our current environment, capital is available to technology companies from multiple sources, both public and private. And that’s the point. Canada’s innovation sector is on the upswing because companies have options available to them and all the different players in this ecosystem have skin in the game – entrepreneurs, angel investors, venture capitalists, public market investors, the start-up community, national and regional incubators, and industry organizations. Working together, we’re all playing our part in giving companies multiple funding options to help build the next innovation leaders in Canada.

For year-to-date statistical information on the innovation sector and other sectors on TSX and TSXV, please click here to consult our Market Intelligence Group (MiG)’s monthly MiG Report.

This article is provided for information purposes only. Neither TMX Group Limited nor any of its affiliated companies (collectively “TMX”) guarantees the completeness of the information contained herein. We are not responsible for any errors or omissions in, or your use of, or reliance on, the information we post or information accessed through links to any third party sites. TMX has not prepared, reviewed or updated the content of third parties on this site or the content of any third party sites, and assumes no responsibility for such information. Nothing in this article is intended to provide investment, financial, tax, accounting, legal or other advice and you should not be relying on it for such advice. TMX does not endorse or recommend any securities referenced in this article. It is not an invitation to purchase securities listed on Toronto Stock Exchange and/or TSX Venture Exchange.

This article was sponsored by TMX Group.