July was a slow month for M&A in Canada, mainly because we don’t count the remaining purchase of Bell Aliant by BCE as a technology deal.

There were only 16 transactions generating a total of $269M CAD in announced value for July after a $373M June.

Wipro, the third largest IT service company in India, has acquired Edmonton’s ATCO I-Tek in the largest technology deal of the month. Elsewhere, Retsly, a mere 6 months out of the GrowLab accelerator, was bought by Zillow, the world’s largest home and real estate market place in a deal advised by GCA.

Because we report the M&A transactions from the sell-side, we haven’t been tracking Canadian technology companies buying foreign companies. This month, you see in our data that Hardy Capital “bought” Shoe Me. In fact, it was part of a combined roll-up of Shoes Online, a Seattle company and Roger Hardy reported that the combined entity approaching $200M in sales. So, it isn’t in the data, but was still a prominent transaction. 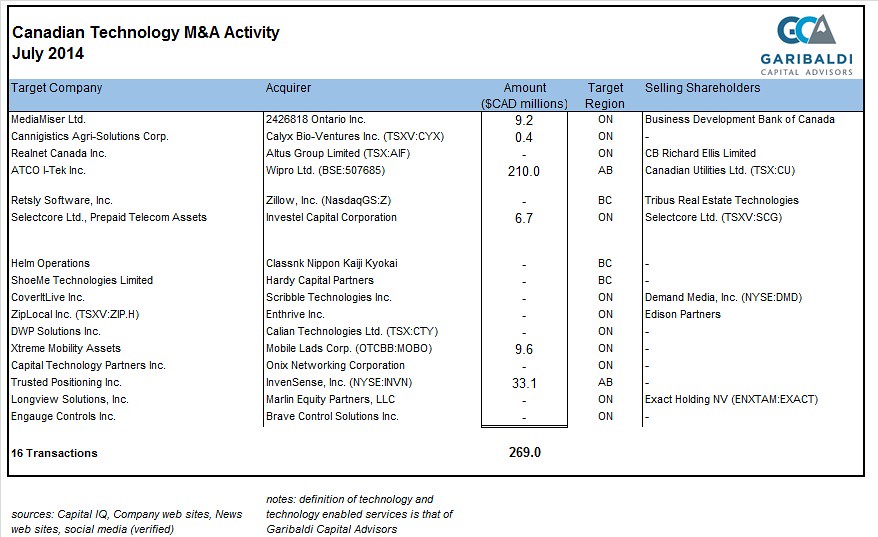 Canadian technology financings had their second lowest month of the year at $88.7m in total over only 16 transactions (only April was lower).

The biggest deal was Toronto’s Freshbooks raising a total of $32M CAD in it’s first round. Oak Investment Partners led the round. Other investors included Atlas Venture and Georgian Partners. Georgian Partners was busy as they also gained an equity position with Vision Critical after leading the $16M CAD raise this month. 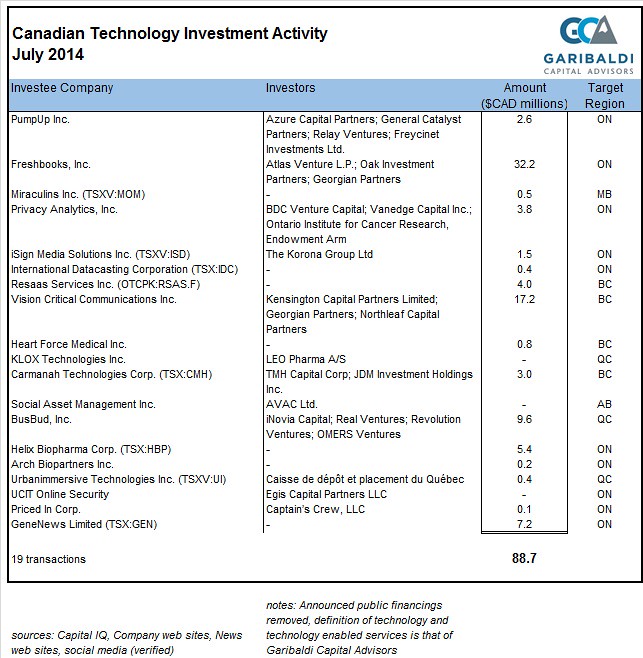 Canadian technology M&A took a pause in May after a run of big deals every month since January.

$112 million in announced value across 22 transactions is second only to January as the lowest month (January was $109m). We happen to know that some of the deals in this list (Wurldtech for instance) will likely be announced in the quarterly filings by their public company buyer. When it is announced, we will re-visit the month and add on what we find in the public domain.

The only sizable announced deal in May was PNI Digital (formerly known as Photochannel Networks) being sold to Staples fro $75m CAD.​ Fixmo sold to Good Technologies after an intellectual property battle, but deal terms were not announced. 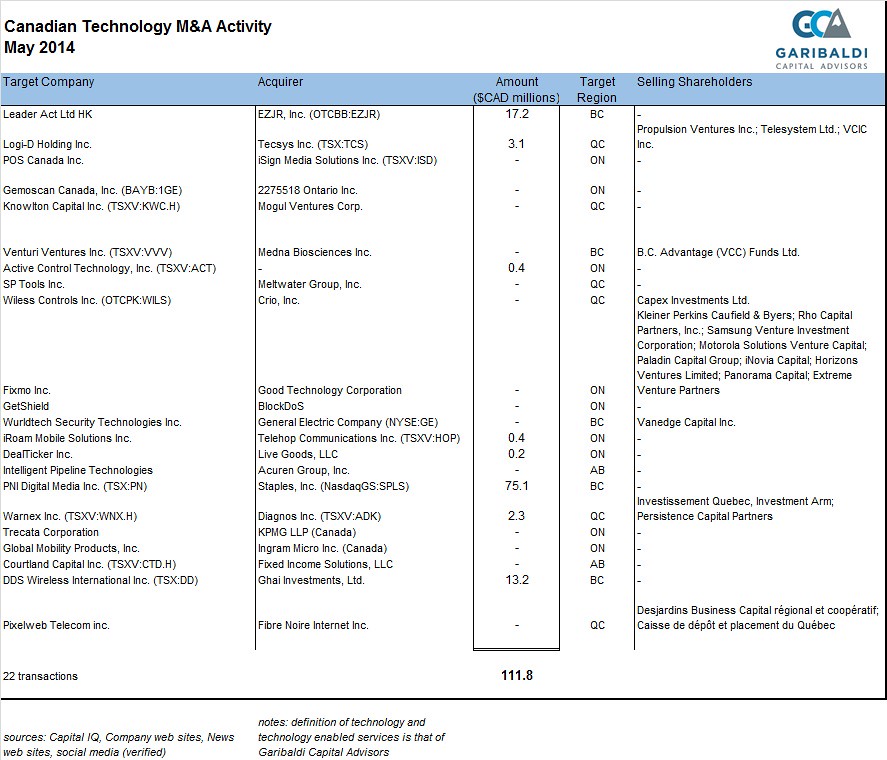 On the financing front, the announced $154m in financings is about the average of the first four months of 2014 ($165m per month). A couple of Toronto based companies raised significant growth rounds. Top Hat Monicle closed $11m and Shop.ca added an impressive $31m to its coffers.

But the big story of the month was the massive funding on the Rock. St. John’s Verafin raised a whopping $60m from Spectrum Equity Partners. Not only is this a big funding anywhere in Canada by our count, it is the fourth largest of a private technology company in the past 18 months behind Hootsuite ($171m), Xplornet Communications ($148m) and Shopify ($106m). 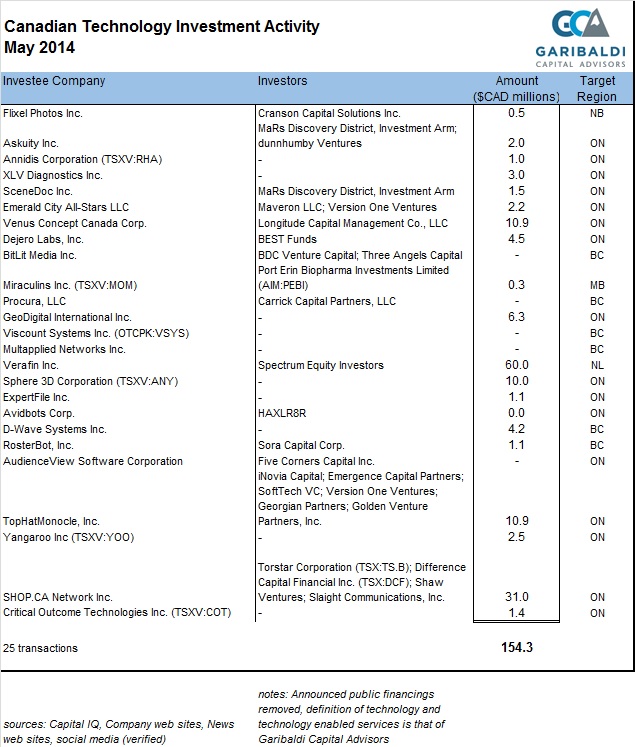 Please send us any publicly disclosed transactions that did not make our list. We aim to update and submit the quarterly and year end amounts for all of the M&A and private fundings into the private and public technology companies in Canada.

Garibaldi Capital Advisors is a technology-focused transaction advisory firm founded by Brent Holliday, Paul Kedrosky and Andrew Jones. We have committed to help Techvibes curate the technology transactions happening every month across Canada.

We started with January 2014 cohort and aggregated and shared our summary. What we need from you, participants in the technology ecosystem, is further information to fill in the blanks where our data sources fall short: missed deals, angel or seed financings and any other corrections or clarifications are encouraged. While Garibaldi starts the ball rolling, we intend to make all the data that is gathered here available publicly through Techvibes.

This is a collective effort at accuracy we feel can’t be matched by any other method. We will do our best to verify submitted information (and where it is verified, send corrections to our data sources). Garibaldi will then take the data and add to it (categorization by industry, stage of the company, etc.) and present quarterly and annual totals for everyone to share.’

As you can see below, the 21 transactions represent a total of $78.6 million on a disclosed basis. Toronto-based start up Wattpad raised a $50.3 million capital led by OMERS Ventures in Ontario. ThermoCeramix Corporation raised $7.5 million dollars in Quebec. 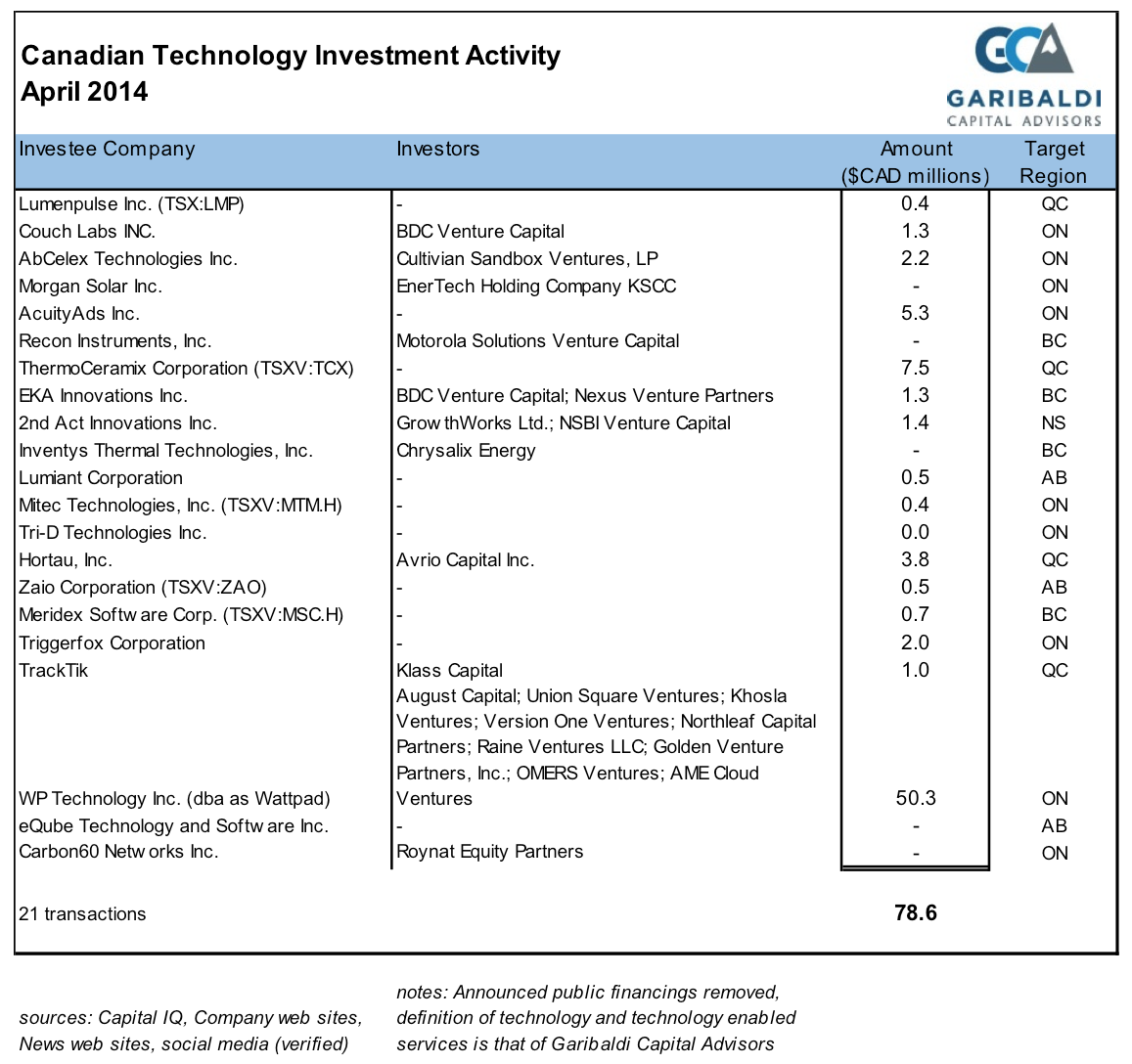 As you can see, many of the M&A transactions do not have reported amounts and many never will, although there will be rumors and talk around the bar. We only report amounts where there is a public disclosure of some form. 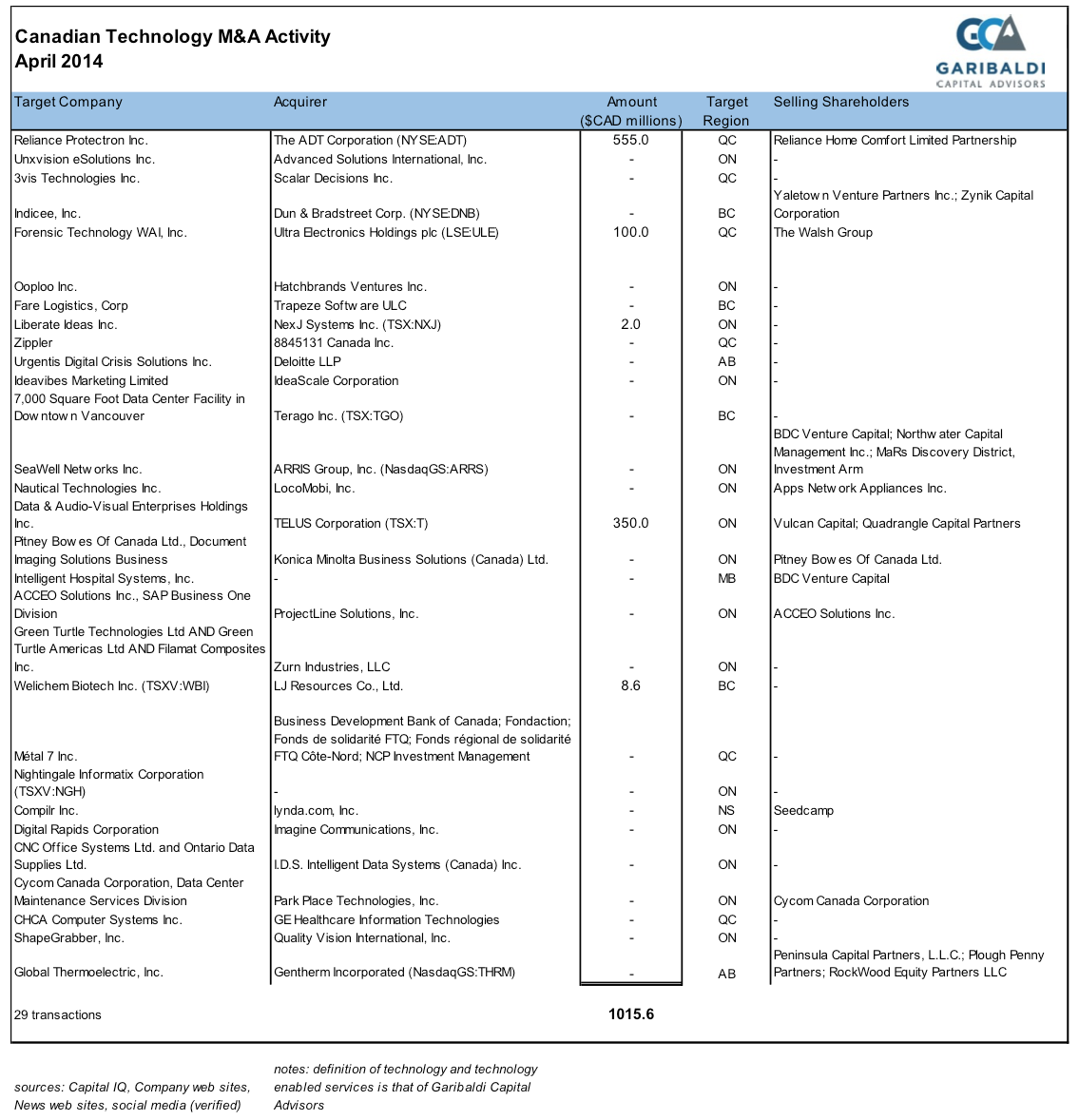 Please feel free to comment below or email us at ea@garibaldicapital.com.

March activity in M&A was again dominated by one transaction.

Ontario’s Nordion, in the heath care technology space, sold to Sterigenics for $848m. The only other announced sizable transaction was Quebec’s X2O Media selling to Barco for $21m. Of interest, Zite was sold again, as CNN passed it to Flipboard in a transaction whose price was not announced. 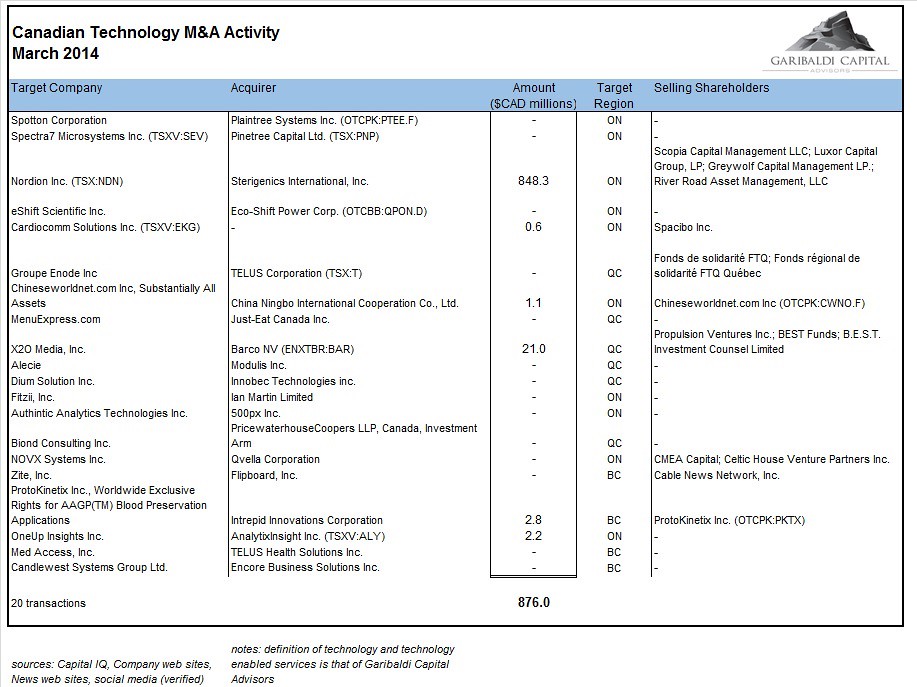 In funding, the month was the biggest of the year so far with Quebec’s Knight Therapeutics in the biotech space taking in $255 million in two closings in a private placement. Of note, Calgary’s Slyce raised a large round of $12m. It was a good month in Alberta as publicly traded Sylogist also raised a large round of $15m. BC had another large growth equity raise with Themis Solutions (better known as Clio) raised $20m from Bessemer Venture Partners and previous investors Version One and Acton Capital.

In general, it was a decent month for US investors coming into Canadian deals: Blumberg and Tenfore came into Trulioo as part of the $6.7m raise, the aforementioned Bessemer participation and Salesforce.com invested in Toronto’s Aislelabs. 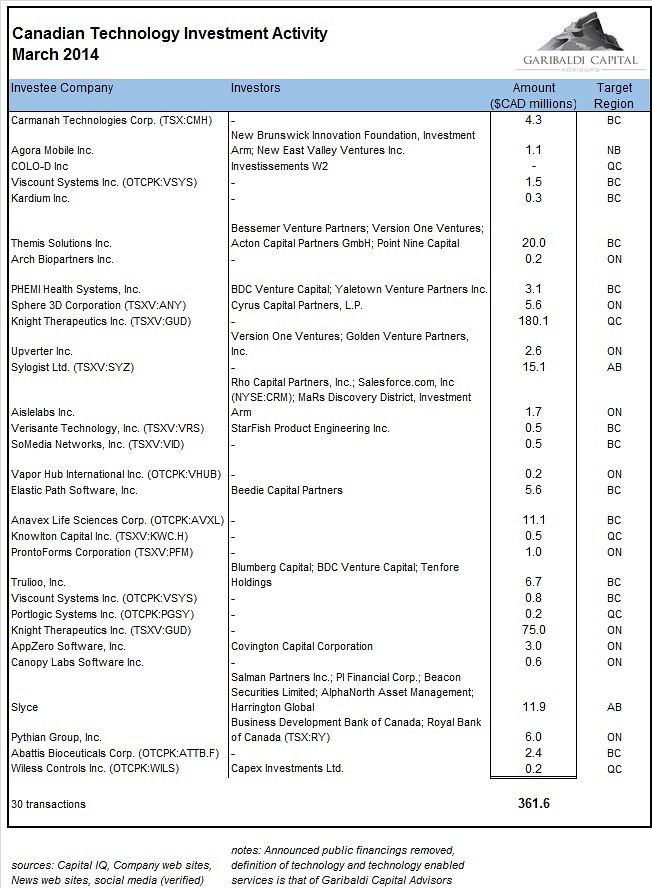