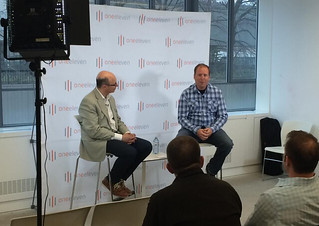 He is in Canada for the first time since 2008 to check out the startup climate in Toronto and Waterloo after hearing about good things that were happening here. When asked about expanding Techstars into Canada, however, he was a bit vague saying that it could happen. He observed that there was a lot of interesting things happening in Toronto and that entrepreneurs are trying to tackle serious things especially in the sciences. He was also impressed with how much support and energy the government is starting to offer to the startup community in Canada.

Techstars was the first accelerator and started out as one location in Colorado; it has since expanded into six cities including an international location—London, England—that Cohen noted was challenging due to how different the climate is there. Techstar’s original goal was to make the small town of Boulder a better place to launch an internet startup. The community worked together with their mentors give first philosophy that helped Boulder become the number four place for VCs to invest in the world with a population of only 100,000 people.

Techstars receives an average of 12,000 applicants for each cohort making the odds of being accepted less than 1%.

Cohen also commented that anyone can raise from family, friends and saving but having the right network is what adds value to the equation. Mentors in the program are warned to not tell entrepreneurs what to do rather what they would do and allow the entrepreneurs to decide and can be asked to leave if they do not abide by this principle. Their hands on approach also has mentors looking at code and helping startups find their first customers. Techstars works to keep the community the best it can be seven years later, with investors getting 10% or less of a startup’s equity.

“You should be able to start an internet company from anywhere; having to be in Silicon Valley is an idea that I was born to fight,” Cohen said.

He supports all accelerators and thinks that they are good community builders. He noted that some common startup killers are the lack of uptake in the market or team failure and he said raising is not the main challenge. He recommended to invest in an area where you can be in the best in the world. When investing and reviewing companies, he prefers entrepreneurs that can show versus tell and emphasized the importance of presenting to investors in a compelling way.

“Ideas are nothing, execution is everything. You won’t win on features,” Cohen stated. He only invests in companies that have passion.

“Be open to randomness,” encouraged Cohen, who believes you just never know who the person is sitting next to you and what can happen. He also mentioned that mindset and confidence matter and are very important to be successful as an entrepreneur.