Unlike many industries refusing to adapt into life within the 21st century, and our way of collecting information, meetups in tech are a thing.

Meetups are everywhere. Vancouver is a hub of convection ovens like these. Mostly because of the chosen locations for the meets are usually small studios that weren’t meant to hold a few hundred patrons all jawing at one another in hopes of squeezing a bit of knowledge from the rags, so they’re extremely warm. From that lava surfaces the growth of our city.

I’ve met countless startup CEOs, millionaire data devs, and even friends that I wish to keep for the rest of my foreseeable future at these meetups. And there is one for nearly every interest, almost every week. (Check out a list here.)

One has had a profound effect on the tech world of Toronto. Named Tech Toronto, the industry standard for tech meetups finally gave coming out west a shot.

Vancouver and Toronto are compared side-by-side all the time, the businesses of each town are reflections of their environments, and remain different in many ways. However, thanks to the developed world, and our attachment via the World Wide Web, Tech is Tech, almost everywhere you go it’s the same industry.

In Tech, Vancouver is in almost every conversation when people discuss the influential cities for tech growth, and startup culture on Earth. So it isn’t lost on me why a large, historic group like TechToronto would see potential here, and inquire about whether we’d wear the left shoe of their efforts (I use this metaphor picturing a map from my POV, Vancouver clearly being to the left of Toronto… but you know how maps work). Last Tuesday, we had our first “footwear fitting” if you will, the first ever TechVancouver.

This gathering could be a really big deal, if they just played a full poker hand instead of yelling “go fish” like they did at Unbounce HQ on February 23.

Pick a theme, or direction. If every TechVan meet had a different theme, and the speakers/presentations were geared towards a specific problem, or solution, or operation, I think there could be extensive value here. But this “all over the place” contortion of interests put together for the inaugural gathering doesn’t allow me to clearly see what they’d like to grow this venue into.

Meetups are all over the place, there are a ton of them. The list linked to above is a staggeringly large amount, and the one thing that keeps these events/gatherings from making exceptional ground is direction.  They’re messy.

If you want to learn anything about the way to do large-batch information consumption, go to a code academy bootcamp. They don’t jump around from one code language to another, they teach you one, then the next.

Sure, I see the intention behind a vast array of voices and topics; you sell more tickets that way. It could also be your ticket on the next flight out of YVR if you’re not lucky or careful. We could all benefit from learning more from one another, and this group has a fine chance at starting a kind of fire that has yet to take any other Vancouver Meetup beyond the gatherings they currently are. So please, theme your sessions, apply some training techniques, and bring a couple of air-conditioners.

At the end of the day, the first TechVan meetup wasn’t a waste of anyone’s time. There were plenty of fresh faces, a couple of familiar ones, and a ton of job-title adorned rectangular cardstock passed around.

The talks were great, albeit scattered, and I truly feel that once the TechVan organizers get the rhythm down, something big will brew from a more finely tuned gathering of the same flavor I witnessed on that clear February evening.

Also, if you’re going to have a drink sponsor, don’t let them run out of refreshments.

I look forward to the next TechVancouver meet, and hope to see you there. 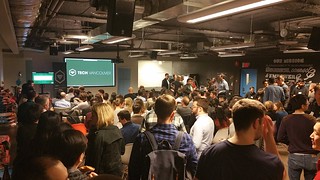 On Tuesday, TechVancouver held their inaugural meetup at the Unbounce office in Vancouver with nearly 150 people in attendance.

TechVancouver brings together tech leaders, innovators, and enthusiasts with the intention of creative education, networking, and advancing the city’s technology ecosystem.

After drinks and mingling, the event opened the “community mic,” which allowed anyone in the audience to take 5 to 10 seconds to present themselves or their company to get exposure and facilitate later conversation.

The event featured five-minute, TED talk-like presentations from selected local technology leaders.  Last night, Kevin Sandhu of Grow, Andrew McLeod from RentMoola, Kimberly Hansen from signl.fm, Spencer Thompson from Sokanu, and Jayesh Parmar from Picatic each had five minutes to impart their wisdom before being cut off.

Organized by Alexander Norman, TechVancouver is a counterpart to TechToronto, which was created to strengthen the tech community in the city.

Norman said of the value of the event:  “You meet someone new, and you learn something new every time you come out.”

Norman claims the turnout in Vancouver tripled that of the first event in Toronto.

Highlights from the Talks

Kevin Sandhu of Grow discussed the future of the digital banking experience in Canada.  Showing a screenshot from one of the major five banks informing the customer that their digital experience will be followed up with a call for an appointment to come into a branch, Sandhu said, “This is not a 21st Century experience.  It’s not a 21st century solution, going to what is called online banking but realistically is an online portal for what you really want to do.   It’s a sad excuse for a digital experience.”

He claims in five years, the digital experience will change, though in what way is anyone’s guess.  The spirit of change though, he claimed, will be one of increased convenience, transparency, and flexibility as exemplified by Uber, Airbnb, and Netflix in their respective domains.

Andrew McLeod from RentMoola discussed fundraising.  “Everyone with a startup should pitch a VC at least once.   If you want to feel bad about yourself, it’s the best way.”  The lessons he emphasized were 1) don’t take the first deal, and 2) treat a partnership with a VC like a marriage.  “You don’t want to be married to someone you don’t like.”

Kimberly Hansen from signl.fm spoke of lessons in branding, with funny anecdotes on choosing a name.  For instance, you do not want a business name that autocorrects to ‘vomiter’.

Spencer Thompson from Sokanu discussed the question:  “Why does your company exist?”   If you want to build the best company or career for yourself, Thomspson claims, it needs to be aligned with and optimized according to one of five reasons for being.

Thompson has categorized these reasons as 1) to make as much money as possible, 2) to solve a personal problem, 3) to solve a market need, 4) to solve a social issue, and 5) to utilize personal abilities.

Finally, Jayesh Parmar from Picatic, a company that just surpassed $10 million in sales, presented a captivating talk on ‘dogfooding’, or using your own product, taking the audience through Picatic’s meandering and fascinating journey from Saskatoon through San Francisco, Toronto, New York, and finally Vancouver, and discussing the highlights and advantages of each.

The next TechVancouver meet up will be on March 29 and posted on meetup.com.